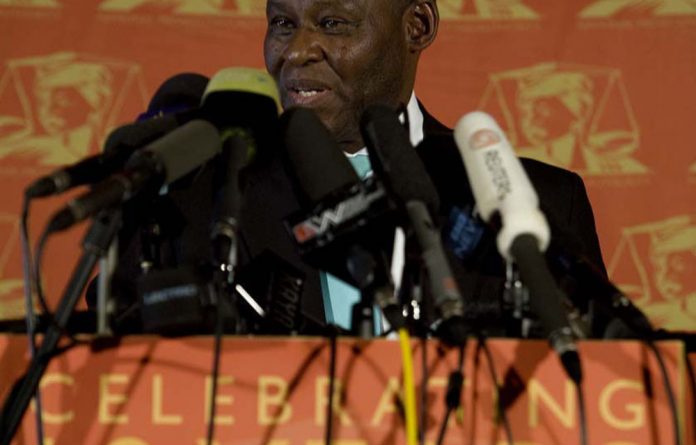 The appointment of former acting prosecutions head Mokotedi Mpshe as an acting judge on the North West bench may be unconstitutional, the General Council of the Bar (GCB) has warned Justice Minister Jeff Radebe in a strongly worded letter.

Bar council chairperson Patrick Mtshaulana wrote to Radebe in the wake of revelations in last week’s Mail & Guardian that Radebe had approached at least two judges president to find a berth for Mpshe.

The appointment was formally announced by a government news agency last Thursday following questions from the M&G.

Relying on a 1985 full-Bench decision of the Lesotho Court of Appeal, Mtshaulana highlights the possible unconstitutionality of the appointment, while reminding Radebe that the issue had previously been raised with former chief justice Pius Langa and the Judicial Service Commission (JSC).

The letter points out that the question of appointing civil servants to acting judgeships was canvassed before the JSC by senior counsels Dumisa Ntsebeza and Ashley Binns-Ward after the similar appointment of a state attorney: “Advocate Binns-Ward SC explained that the GCB objection to these prospective appointments was premised on the imperative to maintain and protect judicial independence in the broadest sense of the concept.”

Ntsebeza, of Advocates for Transformation, had given a different perspective, indicating that the “issue was a very complex one, especially when considered in the context of the transformation of the judiciary”.

“He [Ntsebeza] indicated that the Advocates for Transformation had different and divided views on the matter,” an excerpt from the minutes shows.

According to Mtshaulana’s letter, Binns-Ward brought to the attention of the JSC a Lesotho Court of Appeal decision that declared “the appointment of a member of the attorney general’s staff as an acting judge to be unconstitutional”.

Freedom Under Law, which also slammed Mpshe’s appointment, had made a similar suggestion, stating: “The appointment of a civil servant as a temporary judge fundamentally disregards the division of powers entrenched in South Africa’s Constitution and is in conflict with the leading judgment on the point in the SADC region.”

The JSC has also raised objections to the appointment. Its spokesperson, Marumo Moerane, told Business Day that it was “undesirable for a permanent employee of the state in the position of a public prosecutor to be an acting judge and thereafter return to his position”.

Radebe’s spokesperson, Tlali Tlali, said that Mpshe would be “detached” from his responsibilities at the National Prosecuting Authority. Should the matter come before a court, Tlali’s view is likely to come under fire in terms of the Lesotho decision.

In that case the Lesotho Law Society raised an objection after a state attorney was appointed an acting judge. The country’s appeals court rejected a suggestion that the state attorney concerned had “severed all connection with the Crown Office”.

Mtshaulana further reveals that on December 23 2008, after the initial JSC discussion, he held a follow-up meeting with Langa during which he indicated that the JSC had decided against employing state employees as acting judges.

Langa, Mtshaulana says his notes show, indicated that it was “not prudent to have state employees as acting judges. He, however, wanted to establish from the minutes whether his recollection of the JSC decision was properly reflective of the actual decision.”

Mtshaulana continues: “I write this letter to request you Minister to suspend the appointment pending the decision of the JSC on the issue. Needless to say, if the former Chief Justice’s recollection that there is a decision of the JSC is correct [sic], then the matter should be closed.”

Mpshe’s acting appointment has raised eyebrows not only because it was on his watch that charges against President Jacob Zuma were dropped, but also because other NPA employees have been pressured to choose between acting appointments and working for the prosecuting authority.

Current Western Cape High Court Judge Elizabeth Baartman eventually resigned her position in the Asset Forfeiture Unit after her employer put pressure on her not to accept acting appointments.

Another candidate interviewed at the same time as Baartman last year, Nomonde Mngqibisa-Thusi, told the JSC that she “read between the lines” and stopped accepting acting appointments after pressure from her employer.