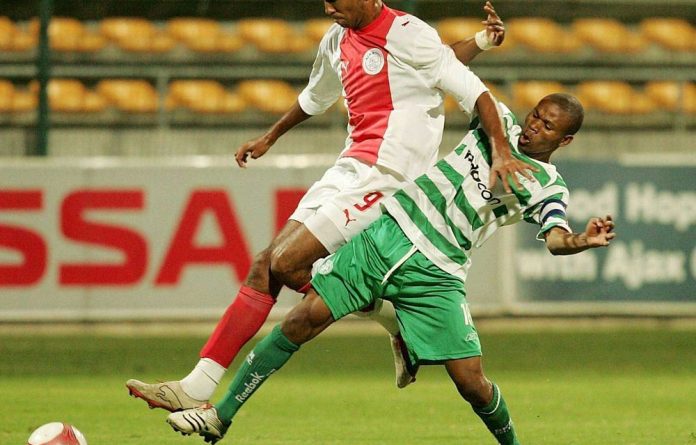 Relegation candidates Jomo Cosmos suffered another set back when they went down 1-0 to Ajax Cape Town at Athlone Stadium on Tuesday night.

It was one way traffic early on as the home team’s incisive passing game kept Cosmos very much on the back foot.

In as early as the third minute Dipsy Selolwane looked set to fire the hosts ahead when he latched onto a loose ball just inside the box, but his stinging drive was kept out by the legs of Cosmos keeper Avril Phali.

More chances followed for Ajax as Thulani Serero failed to get enough contact on a close range effort, while Lance Davids tested Phali from some distance.

After Cosmos had finally mustered a chance through Bamuzo Sono’s 17th minute chip, the home side came close to scoring when Nathan Paulse got on the end of a Sameehg Doutie cross, but Phali made a brave save.

In the 33rd minute the Cape side looked to have won a legitimate penalty when Tshepo Moloto cut down Paulse in the box, but referee Daniel Bennett elected not to point to the spot.

After the break the home side continued their dominance from the first-half, with Davids forcing his way past several defenders before firing goal-wards, but Phali again got a crucial touch to keep the ball out of the net.

Running out of ideas
Inventive or enterprising play up front was non-existent as far as Ezenkosi were concerned and their best chance for a goal appeared to be from a set piece, when Thapelo Tshilo forced Hank into a diving save in the 66th minute.

Ajax had a few close chances of their own from set play, but neither Doutie nor George Maluleke could find a way past Phali.

Finally, the goal Ajax deserved arrived, in the 82nd minute, when Selolwane’s shot from a tight angle on the right flew past a helpless Phali and in to the bottom corner of the net.

The goal awoke Cosmos from their slumber and they came at the Urban warriors for the final stages of the game, during which time Siza Dlamini twice came within inches of grabbing an equaliser.

But it was a case of too little, too late from an Ezenkosi side which lacked the urgency their current position in the league table calls for. — Sapa

Rivaldo Coetzee clings to a dream

After his move to Celtic fell through, the young gun was forced to reassess what’s worth fighting for. But his ambition to play in Europe remains
Read more
Advertising
Continue to the category
Politics