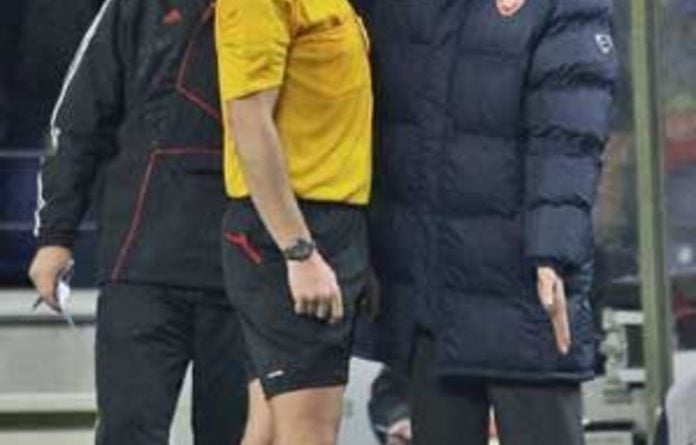 Arsene Wenger accused referee Martin Hansson of gifting Porto the winning goal in the Portuguese side’s 2-1 victory over Arsenal in the first leg of their Champions League last 16 tie.

The Swedish official allowed Porto to take a quick free-kick in the 52nd minute of Wednesday’s game after Arsenal goalkeeper Lukasz Fabianski handled a back-pass, allowing Falcao to score what proved to be the winner.

Hansson came under fire in November after failing to spot a clear handball by Thierry Henry in the build-up to France’s winning goal in their World Cup qualifying play-off with the Republic of Ireland.

“It is better than a penalty. It is unbelievable that he allows Porto to play straight away and put the ball in the net. I’ve been in football for a long time and I’d never seen something like that,” Wenger said.

“Either the goalkeeper keeps the ball until everybody’s back, or he gives the ball back. The rule is basically encouraging the players to be unfair.

“You cannot accept the way the referee treated this rule. It’s impossible to defend. If you give the ball back, the guy gives a pass and it’s a goal.

Wenger also queried the decision to award the free-kick, arguing that Sol Campbell had not deliberately passed the ball back to his goalkeeper, and said Arsenal should have been given a penalty for a foul on Tomas Rosicky shortly before Porto’s second goal.

“It was a strong penalty appeal for us on Rosicky that was unfortunately turned down,” he said.

Wenger’s opposite number Jesualdo Ferreira dismissed Arsenal’s complaints about Falcao’s contentious strike and said it owed more to the intelligence of his players than any perceived incompetence on the part of the referee.

“It was a legal goal,” said Ferreira. “It’s a situation where coaches don’t know if they want to slap their own players or take it out on the referee. But it was a piece of play born from the intelligence of the Porto players.

“Wenger is angry but Thierry Henry scored a similar goal when he was playing for Arsenal. The goal came from our intelligence and gives us a definite advantage.

“We played a very good game and proved our quality, which was the main objective. The quality of the team is a source of satisfaction and shows that we are only going to get better.”

Campbell headed Arsenal level in the 18th minute after Fabianski had given the home side the lead with a soft own goal, but Wenger refused to blame his second-choice goalkeeper.

“I don’t want to comment individually on Lukasz’s performance. I do not want to judge him in front of everybody,” Wenger said.

“We lose as a team and we win as a team. Porto played well but we have a chance to turn it around in the second game and I am convinced we will do it. Of course we hope that justice will be done.”

Back to the highest level
Wenger was, however, enthused by the performance of former England international Campbell, who turned in a committed defensive display in his first Champions League game since Arsenal’s 2006 final defeat by Barcelona.

“He had a decent game,” said the Frenchman. “He’s disappointed by the second goal, but he scored an important goal that could prove to be vital in qualification.”

Controversial
In Wednesday’s other match,Bayern Munich substitute Miroslav Klose inadvertently added to the pressure for the use of technology to help referees by heading a controversial late winner against Fiorentina. — AFP