Can a lame duck waddle off? 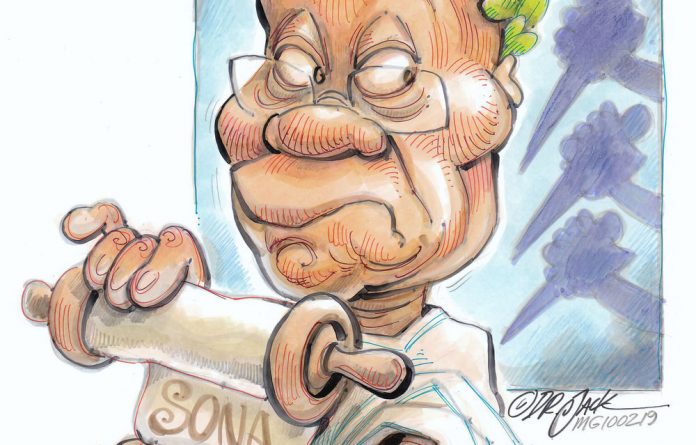 For 15 years I have wended my way up through the labyrinth of corridors and stairs to the press box high up above the Speaker’s lectern in the National Assembly to attend the State of the Nation address — “Sona”, as it is now jocularly known. I don’t think I have missed one since 1996.

As with attending a live football or cricket game, there are advantages and disadvantages to being there. All you see of the president delivering his Sona is the top of his head — if you are lucky and can lean over the balcony from the front row.

His face can be seen on the big screens adjacent to the press box — but then you might as well be at home watching it on TV. But if you are there, you can gauge the atmosphere, the political temperature.

And last Thursday night it conveyed a message more telling — and, if you are Jacob Zuma, more chilling — than anything I have encountered in those 15 years. From the right-hand side of the press box, just inside the entrance — tight to the sightscreen, as it were — you are afforded a perfect view of the Cabinet, sitting in the first few rows of the ANC benches.

You can see their faces, as they watch their president; you can observe their body language. And last Thursday you could smell the sense of distance and disdain.

There was no chemistry; nothing. Several members of the Cabinet sat stony-faced; and they sat on their hands when others offered insipid applause.

It extended up and behind the front benches too; aphonic ANC backbenchers looked dismayed, disheartened. Unprecedented: even at the height of Mbeki’s unpopularity, as resistance to his rule began to approach critical mass within his own organisation, there was respect and there was connection; his parliamentary party never disengaged.

Of course, the ANC caucus is not the organisation; indeed, it does not even hold a formal ranking in the party’s constitution. But losing the support of your Cabinet is another matter all together. And it was striking how in the debate on Sona that took place on Monday the ANC defence of the presidential address was so anaemic.

Where were the big-hitters in the majority party’s speaking list? Why no Trevor Manuel, no Lindiwe Sisulu, no Jeremy Cronin, no Jeff Radebe? Not even Nathi Mthethwa; his deputy, Fikile Mbalula, was sent in to bat at the end of the debate — not so much a nightwatchman as a tail-ender to the slaughter.

A deputy minister to wrap up the presidential debate? What was the chief whip, Mathole Motshekga, thinking of? Has the ANC lost the plot all together?

Zuma’s speech was dismal. Dismally written and dismally communicated. There is little point in “speaking directly to the nation” at 7pm if, head down, you are going to read the speech out. Zuma needs to learn how to use a teleprompter as much as he needs to hire a decent speechwriter — someone who can use plain language (the most, probably the only, appealing attribute of the speech) — to full advantage. Plain should not mean dull or bland; even the simplest prose can be poetic.

But this is about more than spin.

It is also about substance. With a Zuma, or a Reagan or a George W Bush type of leader there are two options: either the lack of grasp of the policy issues is sufficiently well masked by the command of language, or it isn’t.

Tony Heard’s remark to me a few years ago on the subject of spin-doctoring comes to mind: if there’s no wave, you can’t surf. The problem for Zuma is this: if he fails to communicate well, to provide a sense of conviction and direction, of clarity of mind and judgment, then there is very little else left.

The penny is dropping within the ANC hierarchy now. You could see the thought bubbles last week in the National Assembly: “How did we end up with him?” You hear it in the conversations of long-standing ANC members and activists, who remember the days when the ANC’s grand mission was not only to conquer apartheid, but also to do so with a compelling sense of modernity, of non-ethnicity and non-sexism, to set a new standard as a paragon of decency and dignity that would surprise the world and win Africa new-found respect and intellectual status.

Where is that vision now? Tim Modise’s expression told the whole story, during his SABC interview, as Zuma rambled incoherently. This is not snobbery; it is not about command of the English language, per se. It is about a command of the political choices that a president must make. You may not have liked the cut of their ideological cloth, but with Reagan and Bush you knew that they were clear about where they stood and that behind them they had men and women who knew the detail and were being given the political backing from the president to do the job.

With Zuma, I am now far from sure that this is the case. All may not be lost; he still has a talented Cabinet and there is far more space for constructive debate than there was.

But if he can’t provide the clarity of political vision on a range of critical issues — the energy mix and the use of macroeconomic levers to protect jobs, to name but two — then his ministers will be like flotsam on the sea.

Moreover, Zuma needs to hold a disintegrating ANC together. We need a politically cogent and organisationally cohesive ruling party; the public interest will not be served by it falling apart. But is Zuma up to this monumental task?

There is little appetite for another ruthless recall à la Mbeki or a bloody succession battle, neither, increasingly, is there a great deal of enthusiasm within the ANC for much more of Zuma, let alone a second term. Faced with a lame duck president, some are already reaching the conclusion: Zuma should go — and go now.