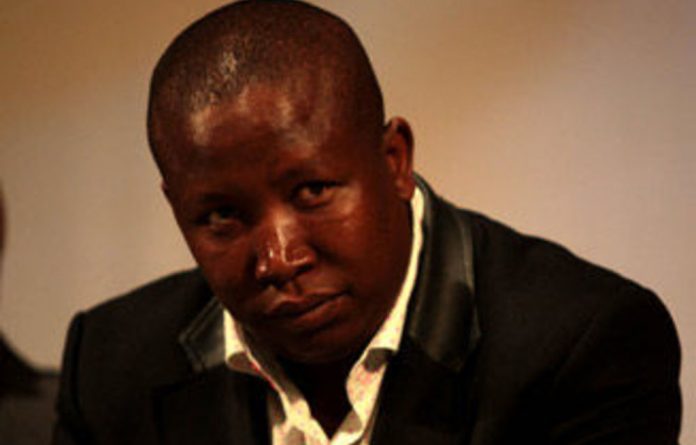 Some of the multimillion-rand tenders awarded to Malema’s companies were from his home province Limpopo, the paper reported.

Citing official tender and government documents, the paper reported that Malema’s companies were awarded more than 20 contracts, each worth between R500 000 and R39-million between 2007 and 2008.

One of the companies, a small engineering firm, was awarded more than R130-million worth of tenders in just two years.

While public documents reveal that some of the projects were completed on schedule, the majority of them were not, the paper reported.

‘I do not owe you any answer’
Malema is believed to have used his share of the profits to finance two luxury homes worth about R4,6-million.

Contacted for comment regarding the tenders by the Sunday Times, Malema said: “What gives you the power to ask me that question? Let me tell you, I do not owe you any answer, to be honest. I am not accountable to you … I am accountable to the ANCYL and ANC. My organisations have never raised any concerns about those things”.

Malema went on to say: “There is no law that says politicians can’t be businessmen”.

ANCYL spokesperson Floyd Shivambu declined to comment on the story, saying he hadn’t seen the paper.

“I can’t comment on things I haven’t seen even if you can explain [the article]. Call me on Sunday when I have seen the story,” Shivambu said.

Not at fault
Meanwhile, the ruling party said on Sunday that Malema had not broken any laws or code of ethics.

ANC spokesperson Brian Sokutu said the youth leader was not at fault.

“The ANC has noted Sunday reports detailing Comrade Julius Malema’s interests, but Comrade Malema is neither a member of Parliament or a Cabinet minister and he has therefore not bridged any law or code of ethics by being involved in business,” he said.

Sokutu added that the ANC was still considering whether to adopt a code of conduct to be adhered to by its senior cadres who have business interests.

Shivambu said the organisation would be calling a press briefing on Monday or Tuesday to clarify the lifestyle reports around its president.

‘Far-fetched reports’
The ANC and the youth league have demanded a retraction and an apology from the Star newspaper for a report on Malema’s lifestyle.

“These reports are not only far-fetched, but they are also untrue as much as they are deceitful,” the ANC and ANC Youth League said in a joint statement.

“In our view they are meant to tarnish the good name and image of the ANC Youth League president.”

The Star reported that Malema bought a three-bedroom home in Sandown, Johannesburg, for R3,6-million in December last year. He had another home in Polokwane for which he paid R1-million.

The ANC and ANCYL also dismissed as untrue the newspaper’s claim that Malema earned a salary of about R20 000 a month, but did not reveal his actual salary.

ANC spokesperson Ishmael Mnisi said in a telephonic interview that the party did not dispute that Malema used a number of cars.

However, Mnisi said Malema had only “one car in his name”.

According to the Star, Malema owns a black Mercedes-Benz AMG, which retails at R734 000, but has been seen driving an Aston Martin and a red Range Rover Sport.

He attended a University of the Witwatersrand lecture on Thursday in a brand-new white Range Rover — with no number plates — which sells for R1,2-million.

The ANC and ANCYL have threatened to take the matter to the press ombudsman unless the newspaper publicly apologises to Malema.

“We will support any action on the side of the president of the [youth league] Comrade Julius Malema against the newspaper in defence of his name, image and integrity.

“It is very unfortunate that a newspaper as reputable as the Star would stoop so low by reporting so inaccurately about the personal affairs of any person including Comrade Julius Malema … We will also want to be provided reasons, through the apology that we are demanding, as to the actual intentions of the Star newspaper and its reporter of putting to the public so inaccurate information bordering on defaming the youth league president.” – Sapa