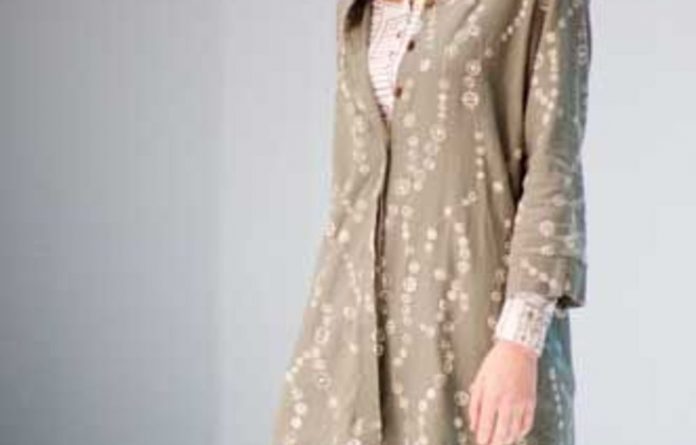 Run your eye along a rack of Sway clothing and you will see florals boasting witty discursions, repeated designs showing mirrored doves, Victoria cages and even matchsticks dancing with apparent haphazardness.Made predominantly of hand-screenprinted viscose lycra, these clothes are comfortable to wear and hang elegantly on the body, but they’re never predictable.

‘The textile industry in Cape Town has all but collapsed due to the crippling expense of import duties and the cheapness of Chinese textiles which has made large scale textile innovation unviable,” says Sway founding partner and former art historian Antoinette du Plessis as she nears her business premises in Woodstock. The area was once the heart of Cape Town’s textile industry and today, Du Plessis says things are beginning to look up: ‘There is a phoenix rising in Woodstock, of small design businesses.”

Du Plesis set joined Ida Cornelia and Petra Giliomee to establish Sway. Cornelia and Giliomee became friends while studying textile design at the Cape Peninsula Technikon in the late 1990s, and today all three have fulltime jobs working for their own establishment.

‘Who would have imagined!” Du Plessis exclaims amid a pile of fabric, clothing and ideas drawn onto acetate. Cornelia and Giliomee started Sway while in their first year at college, producing scatter cushions, place mats and the like, and flogging them at festivals. But how many scatter cushions can one realistically flog? T-shirts were next on their agenda; one thing led to another.

Their new ranges coincide roughly with seasonal change and with important showcasing opportunities —summers correspond with Cape Town’s Fashion Week; winters, with the Design Indaba. This will be the second Design Indaba at which they are exhibiting.

Giliomee and du Plessis design the fabric and garments. The range embraces everything from cardigans to frocks, enabling a delicious flow of graphic elements between the tiers of a dress or the panels of a jersey.

‘We want our work to have local flavour, but not parochially so,” says Du Plessis. ‘Matches and pegs fit into a kind of Pop awareness. They’re everyday objects. We love florals, but we also love things like owls and daisies together. Working by hand gives a different feel from working with computers,” Du Plessis says, raising a bolt of bright red and yellow florals in a Mexican-style . The design includes crowned birds twittering in the foliage.

Sway designs are outsourced and the printing of the fabrics is done by Michael Broers of City Screen in Wynberg. Once the designs have passed through the hands of pattern makers, samplers and pattern graders, it is outsourced to seamstresses still working in the Woodstock area.
While Sway exports as far afield as Norway and Canada, the products are only available at one Johannesburg outlet: ‘It seems Jo’burgers aren’t fond of florals,” du Plessis says dryly. ‘But retailing at the Design Indaba allows us to show new stuff to new clients.”

The work retains its preciousness because they limit their editions. ‘Sometimes we retire designs out of boredom—the match stick design, for instance, is no longer in circulation.”

Others were retired because they were too wild. ‘There was one, for instance, of old men and roses, another of dancing skeletons,” says Du Plessis, rifling fruitlessly through a box of old garments.

‘But we are so in love with our own stuff,” Giliomee adds, ‘we can’t be objective.”

Dipstick of where SA art is at

The foibles that make us all human