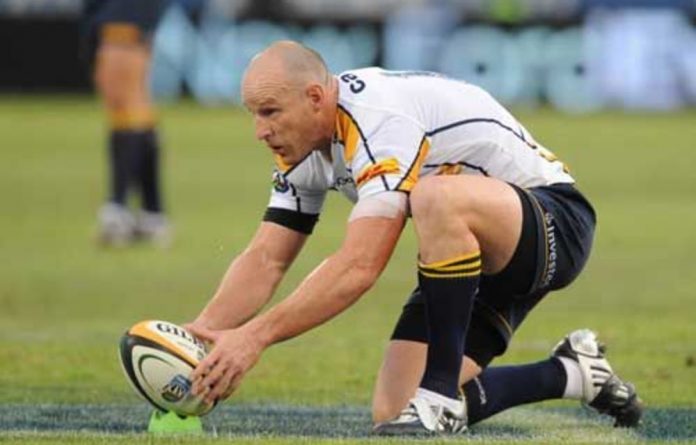 Former Wallabies captain Stirling Mortlock, off contract at the end of this season, has been linked with new Australian Super 15 franchise, the Rebels, reports said on Friday.

Mortlock, who is in Cape Town with the Brumbies for their Super 14 game against the Stormers on Friday, said he was excited by the idea of being a founding member of a fifth Australian Super side.

The Test centre, 32, said he also fancied the prospect of playing under World Cup-winning Wallabies coach Rod Macqueen at the Rebels.

Mortlock, who became the first player to reach 1 000 Super Rugby points earlier this month, is off-contract at the end of this season and has been told by the Brumbies to look elsewhere as they cannot offer the 80-Test Wallaby more than a one-year contract, reports said.

Mortlock has ruled out a lucrative move to Japan and said his options were to play in Europe or with the Melbourne Rebels.

“There are a couple opportunities overseas I am looking into, and likewise the opportunity to be part of a new franchise and a new beginning is a very exciting one,” Mortlock told the Sydney Morning Herald.

“Everything about the Melbourne Rebels franchise seems great.

“Being a founding member of any organisation, and likewise being associated with Rod Macqueen, is a significant part of why I would want to stay and go to Melbourne.”

Mortlock said he would decide his future in the weeks after returning to Canberra from South Africa.

The Australian Rugby Union (ARU) this week brought forward the Rebels’ domestic player signing deadline to March 15 from the original May 31 to allow the new franchise to be competitive in the debut 2011 Super 15 season.

The Rebels have already announced their first signing, England flyhalf Danny Cipriani, who is contracted under the ARU’s foreign player concession that allows Melbourne to recruit up to 10 overseas players. — Sapa-AFP