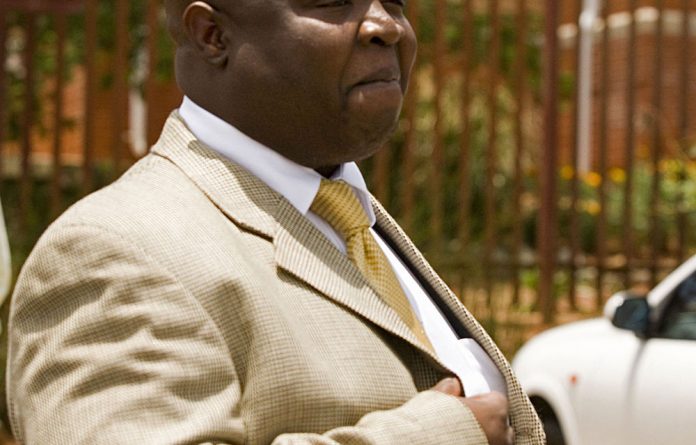 In a 20-page report, dated January 14 and acquired by the Mail & Guardian, Mphego argues that his prosecution on a charge of defeating the ends of justice is unlawful and could jeopardise state security.

At his last court appearance, in December, Mphego’s legal team applied for a permanent stay of prosecution. The former spy boss, a close ally of ex-police chief Jackie Selebi, has now upped his game with the Simelane representations.

Mphego told Simelane that his prosecutors, who are also prosecuting Selebi, are part of a conspiracy to undermine national security and that their main aim is to block the incorporation of the Scorpions into the police.

Replying on February 10 Simelane confirmed receiving Mphego’s representations. He said he was still considering them and had referred the matter to the South Gauteng High Court’s acting prosecutions director, Sello Maema.

Mphego was charged in January 2009 over his alleged involvement in video recording and procuring an affidavit from drug trafficker Glenn Agliotti. In the video Agliotti accused the Scorpions of conspiracy and denied bribing Selebi.

The M&G has learned that Maema is to meet Mphego’s attorneys later this month to discuss the case. Mphego has been asked to produce or provide proof of:

Most of the information in Mphego’s representations emanates from a police intelligence project dubbed “Destroy Lucifer”. This was launched to counter the Scorpions operation that led to Selebi and Mphego’s arrests.

Mphego told Simelane that he had made representations to Mpshe, but claims that he was unlikely to get a fair hearing because Mpshe himself was involved in defeating the ends of justice.

He claimed that Mpshe ignored intelligence about an alleged plot by McCarthy and Mngwengwe to sabotage the police investigation of Nel and that a meeting was held with Mpshe, during which he listened to intercepted calls concerning the alleged plot.

“Advocate Mpshe’s response to this evidence was one of despair. He held both his hands on top of his head, locked his fingers and bowed his head,” said Mphego.

Spy bosses to be roped in for Selebi’s defence
Former top cop Jackie Selebi is lining up four intelligence bosses to save him from corruption charges.
Selebi’s advocate, Jaap Cilliers, told the South Gauteng High Court this week he regards the evidence of these former and current spy bosses as ‘material” in clearing his client.
They are deputy national police commissioner Ray Lalla, former head of crime intelligence Mulangi Mphego, former National Intelligence Agency boss Manala Manzini, and his former deputy, Arthur Fraser, who has quit the NIA.
The Mail & Guardian understands that Selebi and his defence team are considering a three-pronged approach. An application for Selebi’s discharge will be built around drug dealer Glenn Agliotti’s unreliability as the state’s main witness and the state’s inability to prove Selebi was bribed.
If this fails, Cilliers could apply for the prosecutors to withdraw from the case. If strike two fails, Selebi will call in the former spy bosses.
Cilliers told Judge Meyer Joffe this week that he needed time to consult state witnesses who were not called to testify for the prosecution. They are now allowed to give evidence for the defence.
After consulting these witnesses Cilliers will decide whether he wants to bring an application to ‘recall” certain state witnesses, in particular Agliotti and his former fiancée, Dianne Muller.
Mphego, Manzini and Fraser could be called to elaborate on a recorded interview with Agliotti in January 2008 at a Sandton hotel. In the video Agliotti slams the Scorpions and accuses them of conspiracy.
Selebi would require Lalla to clarify circumstances in which a draft national intelligence estimate alleged that slain mining boss Brett Kebble was bribing Selebi.
Former intelligence coordinator Barry Gilder testified this week that the ‘rumour” was discussed at an intelligence meeting that Lalla attended. — Adriaan Basson and Jackie Mapiloko