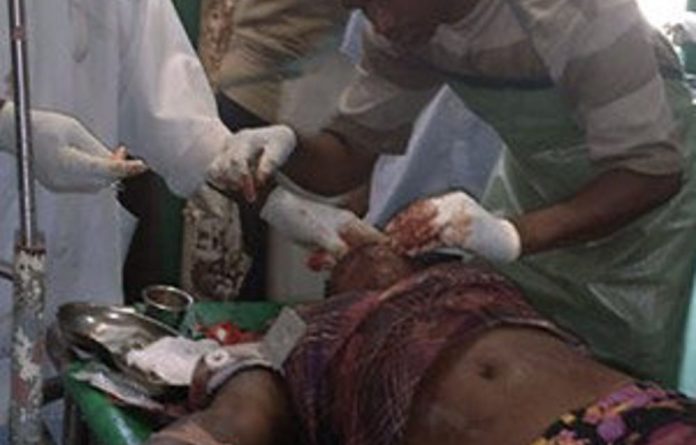 Nigeria’s government sent in troops to the flashpoint northern Jos region on Monday after attacks by machete-wielding gangs on Christian villages that officials say killed at least 500 people.

Under fire for failing to prevent another outburst of sectarian violence only weeks after hundreds died in Muslim-Christian clashes, authorities said they had arrested scores of people in connection with the attacks.

The official death toll was initially put at a little more than 100, but Dan Manjang, an adviser to the Plateau state government, said the toll had now been raised substantially.

“We have been able to make 95 arrests, but at the same time more than 500 people have been killed in this heinous act,” Dan Manjang said in a telephone interview.

Government-run radio also reported that 500 people had been slaughtered in a night raid on three villages on the fringes of Jos, capital of Plateau state.

Witnesses and local rights activists put the figure at more than 200.

“By our latest count there are 202 bodies,” said Shamaki Gad Peter, head of the League for Human Rights in Jos.

Shehu Sani, another leading rights activist, spoke of 250 people having been killed.

Much of the violence was centred around the village of Dogo Nahawa, where gangs from the mainly Muslim Fulani ethnic group set fire to straw-thatched mud huts before embarking on the killing rampage in the early hours of Sunday.

‘We no longer have confidence in the security agencies’
Frank Tatgun, a resident of Dogo Nahawa, said that he had seen two armoured vehicles and three military trucks arrive in the village, and scores of troops were now on patrol.

He reported no new clashes overnight amid the tightened security.

Locals said that the attacks on Sunday were the result of a spiralling feud between the Fulani and the rival Berom clan, which had been first ignited by a theft of cattle and then further fuelled by a deadly revenge attack.

Many of the victims in Sunday’s attacks were hacked to death as they tried to flee into woodland around their villages.

Witnesses said that armed gangs had scared the victims out of their homes by firing into the air but most of the killings were as a result of machete attacks. Those killed were mainly women and children.

“Gunshots were fired just to scare people out of their houses only to be macheted as they fled into the bush,” Peter Gyang, who lost his wife and two children, told reporters in Dogo Nahawa.

A curfew that was imposed after January’s violence was supposed to still be in place but Gyang said that the authorities had done nothing to prevent the bloodshed.

“The operation started at about 3am [local time] and lasted till 6am and there were gunshots, but we did not see a single policeman.

“We no longer have confidence in the security agencies,” added Gyang.

The explosion of violence between rival ethnic and religious groups in January left 326 dead in Jos, according to police, although religious and human rights activists put the overall toll at more than 550.

Acting President Goodluck Jonathan’s office said that the security services in Plateau and neighbouring states had been placed on red alert to ensure that the violence did not spread.

“He has also directed that the security services undertake strategic initiatives to confront and defeat these roving bands of killers,” it added. — Sapa-AFP