Malema: If I’ve broken the law, arrest me 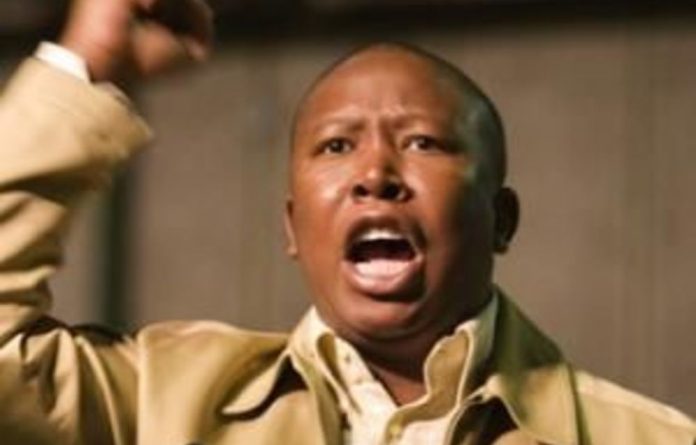 African National Congress Youth League (ANCYL) president Julius Malema says if anyone can prove any wrongdoing against him, they should arrest him.

“I’m not above the law. If there is any crime I have committed, I’m asking to be arrested,” he told students at the University of Johannesburg on Tuesday.

Malema reiterated previous statements that he has never stolen from the poor, and said he would give the R140-million reportedly in his bank account to the less fortunate.

“If I have got R140-million, take that money and nationalise it,” he said, in an echo of his calls to nationalise the country’s mines.

“I’m giving you the permission to take everything else you find in that account and give it to the poor.”

Malema said the perceived “onslaught” against the youth league was not “an ordinary attack”. He said he would “never be ambushed” and never be “looted by anybody”.

Malema also said lifestyle audits were not a concept thought up by Congress of South African Trade Unions general secretary Zwelinzima Vavi. It was a practice carried out by the Scorpions and currently by the South African Revenue Service.

“Why should we be subjected to a factional lifestyle audit?”

Malema again charged he was the victim of forces out to get rid of the youth league. “It you want to kill a snake … hit it hard on the head, that’s what they want to do to me.”

‘Nobody will remove Zuma’
Meanwhile, Malema on Tuesday expressed support for President Jacob Zuma leading the ANC for a second term.

“Nobody will remove Zuma. If you want to serve in the ANC, support Zuma,” said.

Malema also alluded to the youth league not wanting ANC secretary general Gwede Mantashe to be part of the party’s leadership in 2012, wanting him to replaced by Fikile Mbalula.

“But in that top six there is one man who will not be coming back … who has isolated himself from the ANC,” Malema said.

He, however, dismissed reports of plans to oust Mantashe at the ANC’s September national general council, saying all current leaders would complete their five-year term.

Malema claimed that whatever the youth league pronounced on would be the outcome of the 2012 leadership race.

He condemned accusations against some ANC leaders made by Cosatu, as well as criticism by the union federation of Finance Minister Pravin Gordhan and Zuma.

Malema expressed concern over the “apartheid regime of the Western Cape” under the premiership of Democratic Alliance leader Helen Zille.

He accused her of demolishing churches in Khayelitsha and dragging the elderly out of their places of worship.

“Helen Zille, who is suffering from Satanism, has gone all out to demolish the churches in the Western Cape. She is exposing herself … people there will know they voted for a monster.” — Sapa