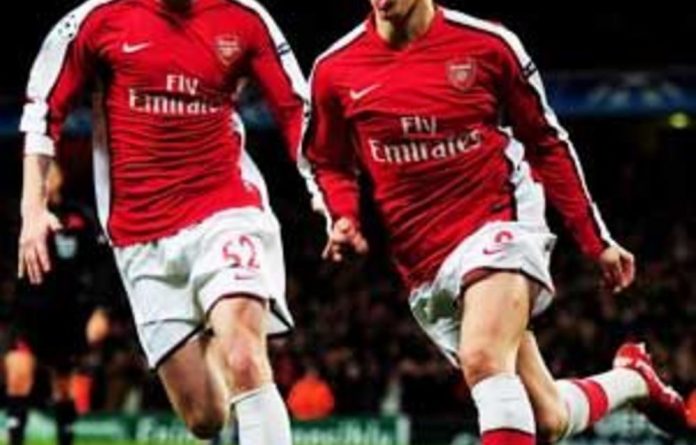 Arsenal manager Arsene Wenger admits he would love the chance for a revenge mission against Manchester United or Chelsea in the Champions League quarterfinals.

Wenger’s side swept into the last eight with a majestic 5-0 victory over Porto at the Emirates Stadium that sealed a 6-2 aggregate triumph in the second round tie.

Nicklas Bendtner was the Gunners’ hero with the first hat-trick of his career, but sublime displays from Samir Nasri, who scored a brilliant solo goal, and Andrey Arshavin put Wenger in unusually fiesty form after Tuesday’s match.

But Wenger insisted he would be happy to play either in the next round of Europe’s elite club competition.

‘We can’t do worse than we did in the Premier League’
“I have a funny feeling maybe it’s good for us to play an English team,” Wenger said.

“We have not done well against Chelsea and against Man U this year and it would be a good chance to show we can do it against them. If we get them we can’t do worse than we did in the Premier League.

“What I don’t want is a negative obssession with avoiding Chelsea or Man Utd.

“We are happy to be in the last eight. It is never easy to be in the top eight in Europe. The negative side of that is you only have good teams left now.”

After being widely written off several times this season, Arsenal showed they are made of sterner stuff than many believed with the kind of magical display that suggests they could yet end their five-year wait for silverware.

“At the beginning of the season nobody expected this team to be where they are but it is important to improve more. There are still some weak moments in the game when we need to improve,” he said.

“Before we think about Barcelona, Chelsea or Man Utd we need to improve.”

While Bendtner deservedly took the plaudits after silencing the critics who had called for him to be dropped following his poor finishing in the weekend win over Burnley, it was Nasri who really caught the eye.

The French midfielder has mostly been used as a winger by Wenger but he deputised for Fabregas superbly in a more central role — proving that there should be life after the Spaniard if he ever leaves the Emirates.

“He is developing well. What Nasri has shown in the game, he has shown in training and I have expected that to come out,” said Wenger.

“He has talent and now he starts to be efficient — great players can assist and score goals, he is starting to do that now.”

Once again Porto left England licking their wounds after a dismal defensive display, but boss Jesualdo Ferreira conceded his team may have been beaten by the tournament’s eventual winners.

“I think they can win it,” he said. “They scored the most goals in the first phase of the competition. They have players of great quality and make the most of important moments in a match.

“They have been playing very well in England and have a big chance to win the Premier League as well. That is what you call maturity and class.

‘When you are playing in the Champions League it is clear a result like this will make a mark and there is a little bit of pain but we will do everything to get over it.” — AFP

Video Assistant Referee (VAR) was firmly back in the spotlight in the Premier League this weekend as Manchester United and Arsenal...
Read more
Advertising
Continue to the category
Coronavirus