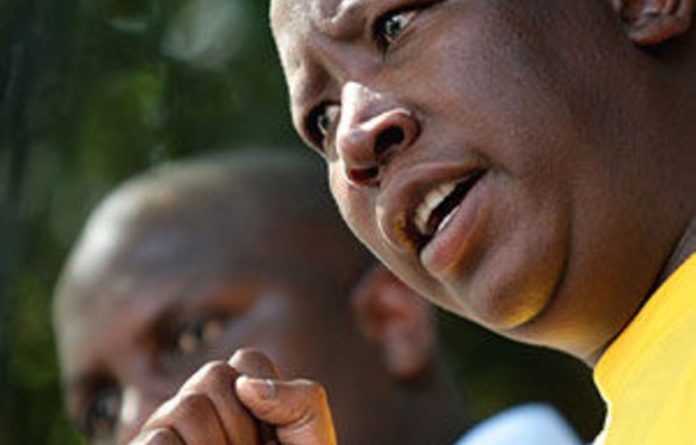 African National Congress Youth League (ANCYL) leader Julius Malema is facing a barrage of complaints to the police and chapter nine institutions over his latest racial outburst, after he led students in singing “kill the boer”.

Freedom Front Plus (FF+) leader and Deputy Agriculture Minister Pieter Mulder laid a criminal charge against Malema at the Brooklyn police station in Pretoria on Wednesday.

Mulder said the use of the slogan contravened section 16 of the Constitution.

“In terms of this section, no person may advocate hate which is based on the grounds of race, ethnicity, gender or religion and which incites action to cause harm to others.

“The FF+ is convinced that Mr Malema, with this action, advocated and incited hatred which could cause harm to citizens, and makes himself guilty of the advocating of hate speech. The FF+ demands that the SAPS investigates the case and take action,” Mulder said in a statement.

“Mr Malema’s use of the hate-speech slogan creates the opposite atmosphere,” said Mulder.

Malema, according to the Sowetan, led students at the University of Johannesburg in a song with the words: “Shoot the boere [farmers], they are rapists.”

He told students that former president Nelson Mandela had convinced black people to forgive, but they should never forget what was done to them.

Embarrassment
AfriForum Youth chairperson Ernst Roets said the organisation would submit a complaint to the Equality Court in Johannesburg.

Roets said it was not the first time Malema sang the song reminiscent of the late Peter Mokaba, a former ANCYL leader known for chanting the slogan “kill the boer, kill the farmer” during the struggle against apartheid.

Malema sang it at his birthday celebrations in Polokwane last week, in a province where six farmers were murdered in the past month, Roets said.

“Julius Malema has become the biggest embarrassment of not only the youth, but also of the country. There is no way in which you can dismiss the song as something that simply has to be viewed in a political context and that doesn’t have any real consequences,” he said.

The Afrikanerbond lodged a complaint with the South African Human Rights Commission (SAHRC).

“It is clear that neither the ANCYL nor the ANC have the political will or power to reign in Mr Malema and his daily tirades against everything we hold dear in South Africa,” it said in a statement.

“We trust that the Human Rights Commission will act in a manner that will restore our faith in this institution, as well as in the promotion of human rights.”

In the complaint, Afrikanerbond chief secretary Jan Bosman said there were about 750 to 850 attacks on farms each year, adding that last year alone 120 people were murdered on farms.

“Incitement to violence is a serious offence and with the current problem with rural safety, we simply do not need a politician such as Mr Malema to exacerbate the problem,” he said.

In 2007, the commission defined the slogan “kill the farmer, kill the boer” as hate speech.

The FF+ lodged a complaint with the SAHRC after ANC members used the slogan during two public meetings in 2006.

Initially, the commission said the slogan did not constitute hate speech, but was an instance, although an undesirable one, of the right to freedom of expression.

However, the party successfully appealed against the finding.

‘Back to square one’
Theunis Botha, acting chair of the Christian Democratic Alliance, said Malema’s comments could not be ignored and dismissed as a joke.

“By the ANC not denouncing statements made by Malema, the joker has now effectively countered one of the rare occasions on which farm murders are condemned by the minister of police.

“While the slaughtering of farmers continues, we are again back to square one as far as the government’s attitude to these farm murders are concerned.”

Mthethwa on Monday said farm murders should not be politicised. He said additional police and efficient tactics would be employed to mitigate farm and rural murders.

“Surely, if Mthethwa calls on politicians not to make politics of farm murders, the same should apply to ANC office-bearers, such as Malema.

“By not banning Malema from the ANC, which is apparently the only way to cut him to size, the country is done a great disservice,” Botha said.

His apparent disregard for the fact that Mokaba’s “kill the boer, kill the farmer” comments were declared hate speech was troubling.

“AgriSA also calls on Mr Zuma, as president and leader of the governing alliance, to denounce comments of this nature and to take steps to prevent government and party leaders from making such statements in the future.”

Malema apparently said Vavi had his eye on a top ANC job, but that he did not “understand the ANC very well” and how its structures worked.

“These utterances by ANCYL president Malema are littered with malice and can only serve an agenda which seeks to isolate Comrade Vavi from his core constituency and base the workers and the poor,” the CWU said in a statement.

“We call on the ANC leadership to discipline the ANCYL president for his insults to senior alliance leaders.”

The ANC on Wednesday said it had not yet decided whether it would talk to Malema about his comments. — Sapa

Natasha Marrian
Marrian has built a reputation as an astute political journalist, investigative reporter and commentator. Until recently she led the political team at Business Day where she also produced a widely read column that provided insight into the political spectacle of the week.
Facebook
Twitter
WhatsApp
Linkedin
ReddIt
Email
Print