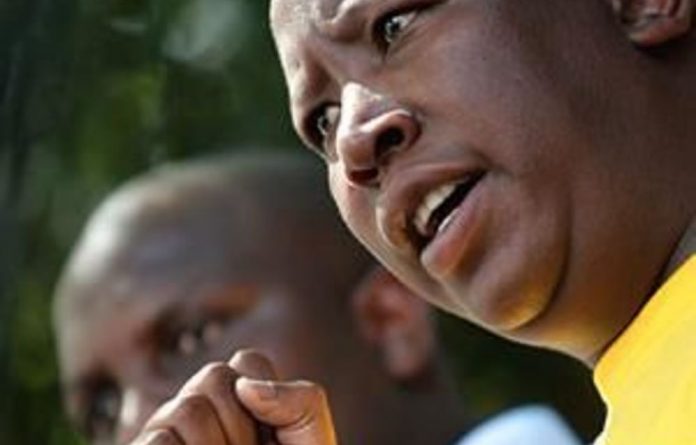 The ruling African National Congress (ANC) on Thursday defended ANC Youth League Julius Malema for singing “shoot the boers, they are rapists”, saying the lyrics of the song had been quoted out of context.

“Let’s discuss appropriately on this matter. Don’t blame Julius. In fact, on this one, I will defend him,” ANC spokesperson Jackson Mthembu told the South African Press Association (Sapa) by phone on Thursday morning.

“This song was sung for many years even before Malema was born … Julius doesn’t even know who’s the writer of the song. He got it from us [the ANC]. You must blame the ANC, don’t blame Julius. But when you blame the ANC, then contextualise it.”

Mthembu said the song was an old struggle song that Malema learnt from his ANC colleagues.

There were many songs in South Africa’s history that could offend people, he said.

“I know of songs that sing of generals … but let’s leave that aside,” he said, declining to name the song, but in a clear hint at the Afrikaans hit, De la Rey, about a general in the Anglo-Boer war.

The song Malema sang was not meant to attack boers, said Mthembu.

“If you don’t look at the song in its entirety, then you lose the meaning,” he said, before starting to sing it to Sapa during the telephonic interview.

Mthembu then explained: “It [the song] says, ‘some people are cowards’, it says, ‘use your gun to shoot’, because it is reminiscent of fighting a war.”

“[It is about] … black people who were cowards … it means oppressive forces, it means those who are against transformation, those who are saying this ANC regime is against the ‘blanke volk’ [the white nation].

“There are some white people who say so, who say we were better off with white ‘volk’ in government.”

Mthembu said he knew not all white people said this.

“Even when we sang the songs, we didn’t want Joe Slovo to be killed. Ronnie Kasrils … in fact, they were leading us in those songs.”

Malema is facing a criminal charge, and a complaint lodged with the South African Human Rights Commission (SAHRC), for reportedly singing at the University of Johannesburg, “Dubula amabhunu baya raypha” (Zulu for, “Shoot the boers, they are rapists”) with a group of students.

The song is reminiscent of the late Peter Mokaba, a former ANC Youth League leader known for chanting the slogan, “kill the boer, kill the farmer” during the struggle against apartheid.

The Freedom Front Plus laid a criminal charge against Malema for allegedly advocating hate. The Afrikanerbond lodged a complaint with the SAHRC.

Mthembu said people who were unhappy with the singing of the song should approach the ANC so it could be discussed.

“But then they should also look at songs that were sung by the forces of oppression.” — Sapa