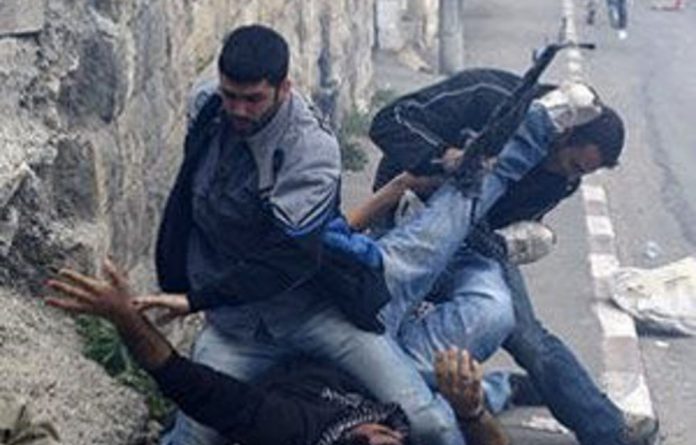 Hundreds of rock-throwing Palestinians clashed with police in several locations in East Jerusalem, which Israel captured in a 1967 war along with the West Bank. Police responded with tear gas and rubber bullets.

“We have come to throw stones because that’s all we have and the situation in Jerusalem is dangerous,” one protester said in a confrontation at an Israeli military checkpoint, reminiscent of the early days of a Palestinian uprising that began in 2000.

Medical officials said at least 40 Palestinians were treated in hospitals in the most serious flare-up in the holy city in months. Police said two policemen were hurt.

The violence was another challenge to US efforts to revive Israeli-Palestinian peace talks, which were suspended in December 2008 but had looked set to resume in the form of indirect negotiations under US mediation.

Israel angered Palestinians and touched off a feud with Washington by announcing plans, during a visit last week by US Vice-President Joe Biden, to build 1 600 homes for Jews in a part of the occupied West Bank it annexed to Jerusalem.

The dispute, described by Israel’s ambassador to Washington as a crisis of historic proportions in traditionally close US-Israeli relations, showed no signs of abating.

US envoy George Mitchell cancelled plans to return to the region on Tuesday after Israel Prime Minister Benjamin Netanyahu said he would not halt construction in what he termed Jerusalem neighbourhoods, disputed areas filled with Israeli apartment blocs in and near the city’s eastern sectors.

Officials in Washington said they were still waiting for Israel’s formal response to demands from Secretary of State Hillary Clinton.

Israeli media reports said Clinton, who termed the announcement of the construction plan an insult, had asked for it to be scrapped and for Israel to agree to discuss core statehood issues with the Palestinians.

Hamas, an Islamist group that controls the Gaza Strip, said in a statement that Palestinians should “regard Tuesday as a day of rage against the occupation’s [Israel’s] procedures in Jerusalem against al-Aqsa mosque”.

Hamas leaders cited the renovation of the Hurva synagogue, in the Jewish Quarter of Jerusalem’s walled Old City, saying the restoration work was an Israeli plot to demolish al-Aqsa, about 400m away.

Israel has denied the allegation and the US State Department, appealing for calm, voiced concern at what it described as Palestinian incitement.

Citing biblical and historical links, Israel sees all of Jerusalem as its capital, a claim not recognised internationally. The Palestinians want East Jerusalem to be the capital of a future state in the West Bank and Gaza Strip.

About 500 000 Jews and 2,6-million Palestinians live in the occupied West Bank and East Jerusalem.

Palestinians say Jewish settlements will deny them a viable state and Washington has cautioned both sides against moves that could prejudge the outcome of peace talks. — Reuters

No incentive for peace talks despite end to Gaza war

Israel plays down talk of war with Iran