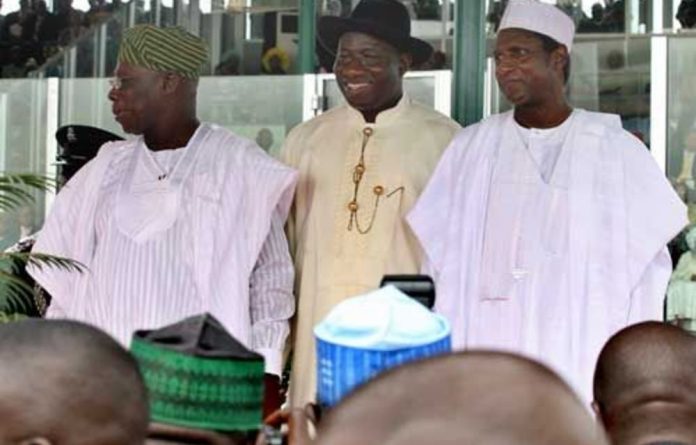 Nigerian acting President Goodluck Jonathan on Wednesday dissolved the Cabinet a little over a month after taking power, asserting his authority over the government in Africa’s most populous nation.

No explanation was given for the move and a new cabinet had not been named by Jonathan, who took over last month after parliament voted to force ailing President Umaru Yar’Adua to step aside until he is well enough to return.

The decision comes at a tense time for one of Africa’s top oil producers, following Muslim-Christian violence in the country’s north and renewed unrest in the oil-rich Niger Delta in the south.

“He did not give us any reason, and so, I cannot give any reason,” she said in a terse statement.

Observers said the move would allow Jonathan to appoint his own team rather than rely on Yar’Adua allies, giving him a stronger hold on power.

Date set for election
The Cabinet had been seen as divided between his and Yar’Adua’s supporters, and the dissolution also follows the electoral agency’s announcement on Tuesday that presidential and general elections are to take place early next year.

“By this action, he wants to consolidate his position in power and govern more effectively. The man really wants to assert himself in power,” Bayo Onanuga, an analyst and editor-in-chief of The News magazine, told Agence-France Presse.

Yar’Adua had spent more than three months being treated in Saudi Arabia without handing over power to Jonathan, his deputy, creating fears of a political vacuum.

Jonathan took office as acting head of state on February 9 after Parliament voted to force ailing Yar’Adua to hand over.

Jonathan, 53, had earlier this month also sacked the powerful national security adviser, Major General Sarki Mukhtar, and replaced him with Lieutenant General Aliyu Gusau, who had held the position before.

Yar’Adua, 58, returned to the country three weeks ago after spending 93 days in a Jeddah hospital for an acute heart ailment.

Since then, he has not appeared in public and no official is known to have seen him.

‘Time to show he is in charge’
Prominent Lagos-based human rights lawyer Femi Falana said that the dissolution of the 42-member Cabinet was “long overdue”.

“He does not want any distraction in governance and so he decided to dissolve the Cabinet so that he can pick his own team,” he said.

“He can now sit down and set up a team that will run the country.”

Analyst John Adekola said that “Jonathan has for long been held down by a cabal in the Cabinet. Now, it is time to show that he is fully in charge of Nigeria.”

Earlier on Wednesday, Muslim herdsmen disguised as soldiers butchered and then set fire to around a dozen Christians close to the site of a recent sectarian massacre, officials and witnesses said.

Most of the victims of the raid on Byei village in Plateau state were women and children, state radio reported.

Police spokesperson Lerama Mohammed said the pre-dawn attack was believed to have been carried out by members of the mainly Muslim Fulani ethnic group which was behind last week’s massacre in three Berom villages near Jos.

Some residents said the killings were part of a spiralling feud between the Fulani, who are nomads, and Berom, who are farmers, which had been sparked by the theft of cattle, rather than for religious motives.

Previous violence in and around the city of Jos, which lies on the dividing line between the Christian majority south and the mostly Muslim north, has claimed thousands of lives in the past decade.

Separately, two explosions on Monday rocked the Nigerian southern oil city of Warri during talks on an amnesty for former rebel fighters in an attack claimed by the main armed militant group, MEND. — AFP