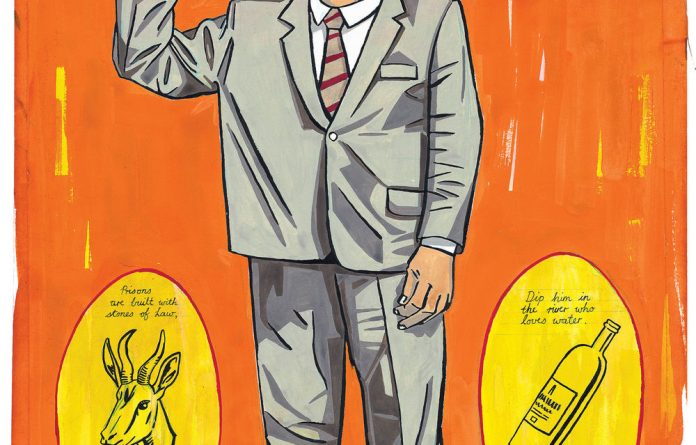 We swung through the M&G newsroom to see who owns what and discovered that, if combined, our staff could hold a respectable exhibition.

Adriaan Basson, investigative reporter: “I own quite a controversial print by Anton Kannemeyer of Bitterkomix, which I bought from the Art on Paper Gallery in Richmond, and a print by Huyser Burger of Battery 9. Francois Jonker is an up-and-coming artist from Pretoria who is also a cousin of mine, so I have a work of his. None of it was acquired as an investment — it was just good and affordable. I’d love to have a pink rugby player by Lawrence Lemaoana.”

Charlotte Bauer, associate editor: “In our lounge we have the most enormous work by Deborah Bell. It has the whole wall to itself and it makes me happy every day. It really belongs to my husband. A bunch of his friends bought it as a birthday gift and I wasn’t with him when he chose it. It’s a painting of a sexless figure. I know more about Deborah Bell than her work. She’s a great dancer at a party.”

Paul Botes, chief photographer: ‘I have the complete Shooting Diana series by Jo Ratcliffe, consisting of 25 prints. She shot it on a small Diana camera, thus its name. Currently it’s in storage but we’ll hang it once we move into our new house.”

Aliki Karasaridis, Thought Leader editor: “My husband was given a small sculpture made by William Kentridge. It’s a mysterious figure about 20cm tall and is in his more recent style. It stands in the lounge. It was a very personal gift and is definitely not up for resale.”

Matthew Krouse, arts editor: “I found an abstract print by Wopko Jensma in a bookshop 10 years ago. It dates back to the Seventies. It’s in primary colours and looks like the inside of a lava lamp. It cost R400. In the same bookshop I found a photograph by David Goldblatt, signed, of the late theatre director Barney Simon’s childhood house in Troyeville. That cost R21. I’m not sure what the R1 was for.”

Ilham Rawoot, investigative reporter: “I own a black-and-white print by Kudzanai Chiurai that contains the slogan: ‘Vote at your own risk’. It was cheap but I reckon it’s going to be worth a lot more than I paid, and already is. It is real, unpretentious and is an honest work about the shit that Africans have to deal with in politics. Now I just need to find a decent frame shop.”

Lisa Skinner, photographer: “I own two Marco Cianfanellis — a sculpture from the Orbit series and a laser cut, a Chris Diedericks, a work by photographer Alon Skuy, work by Gerhard Uys and something by comic artist Jason Bronkhorst. With the Cianfanelli I saved for a year and bribed the curator to let me into the show early so I could buy before the dealers.”