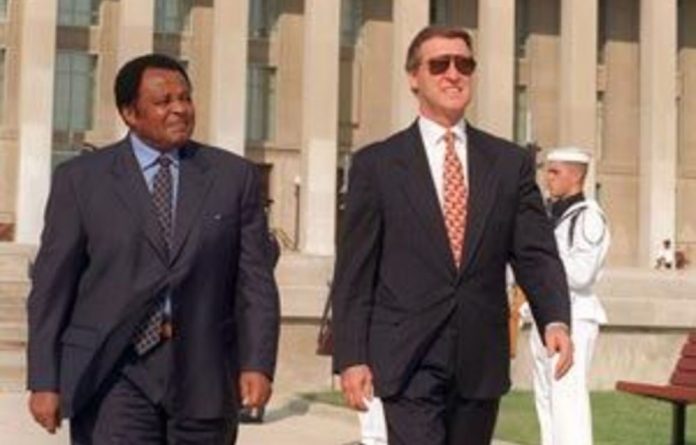 And other documents obtained by the Mail & Guardian reveal for the first time that former defence minister Joe Modise received large, unexplained deposits in his account held at the obscure Habib Overseas Bank in Fordsburg.

Between February 1999, when he was still defence minister, and November 2000, Modise received deposits totalling R1.68-million, of which R600 000 was in cash.

BAE was selected as preferred bidder to supply Hawk and Gripen fighters in November 1998 and the final contracts were signed in December 1999. Most of the cash deposits were marked “as instructed”, with one noting “as per Mr Khan’s instr[uction]”. One cheque deposit for R290 000 is marked “Naseema’s instructions”.

Modise, who retired in mid-1999, died in November 2001, taking many of the arms deal secrets to his grave. But there is no indication that Hlongwane or BAE was linked to these deposits.

Hlongwane — Modise’s special adviser until January 1999 — received more than R200-million in commission from BAE in the decade following the arms deal.

The M&G reported last week that national director of public prosecutions Menzi Simelane had stepped in to block further action against Hlongwane after the Asset Forfeiture Unit (AFU) obtained a preservation order to freeze a portion of his assets held in accounts in Liechtenstein.

Simelane ordered the abandonment of the preservation order last week after requesting representations from Hlongwane’s lawyers and deciding, apparently erroneously, that there was no evidence to support the forfeiture application which would have followed.

It appears that Judge Willem van der Merwe, who granted the initial preservation order, took the unusual step of ordering the 500-page file placed in the public register, after being informed of Simelane’s decision.

The file includes new information about payments to Hlongwane in formal and informal correspondence between the South African investigators and Liechtenstein authorities, who initiated their own investigation into Hlongwane after receiving “suspicious transaction” reports from banking institutions where Hlongwane held accounts.

Information from Hlongwane’s accounts and witness interviews with lawyers and middlemen acting as agents for BAE show that as early as January 4 1999 Hlongwane set up an entity called Westunity Business, incorporated in the British Virgin Isles, a tax haven notorious for its opaque business regulations.

According to evidence from Johannes Matt, whose Liechtenstein business sets up offshore companies and who was the administrator of Westunity, the sole purpose of Westunity was to contract Hlongwane’s services to another company, Arstow.

Matt states that Arstow was set up to receive commission payments from BAE relating to the delivery of aircraft to the South African government.

Arstow was controlled by British defence industry veteran Alexander Roberts, who had retired to Switzerland. Roberts’s only qualification appears to have been that he was a trusted intermediary, having been an associate of Denis Thatcher, husband of former British premier Margaret Thatcher, who, in the 1980s, negotiated BAE’s biggest deal, the Al Yamama contract with Saudi Arabia.

In an account of Roberts’s witness statement he reportedly said he was introduced to Hlongwane by BAE “at some point in 1999”. He claimed Hlongwane was “of great assistance to BAE in helping to formulate and ultimately implement both the offset and black empowerment requirements of the Hawk/Gripen campaign”.

According to Roberts, so helpful was Hlongwane that Roberts, at his own discretion, opted to pay Hlongwane nearly £5-million (R55-million) of the money Arstow received from BAE.

Among these payments was one on June 15 2001, which transferred £598 000 to an account held by Hong Kong company Shun Hing. Matt confirmed being told by Hlongwane that Shun Hing was Hlongwane’s company and was used to finance property in South Africa, including his Johannesburg house, for which he urgently needed funds.

In his statements Matt also confirmed having a long-standing business relationship with a Dr Hugh Thurston. The M&G has reported that Thurston, based in the Channel Islands, was a financial adviser to the Thatcher family and acted as Hlongwane’s authorised representative.

Matt states that Hlongwane and Thurston told him that, through CIC, Hlongwane contracted directly with BAE, giving “advice on the South African market”.

BAE channelled £290 000 into CIC. BAE has previously claimed it had no contractual relationship with Hlongwane until 2003.

Also disclosed in the Liechtenstein documents is evidence that Hlongwane received payments from another BAE representative, John Bredenkamp’s Aviation Consultancy Services (ACS). Bredenkamp and his partners were among the largest beneficiaries of commission — around £40-million — on BAE’s South African deal.

One affidavit states that during a UK Serious Fraud Office search of ACS in Britain a fax was found that stated that a payment was due to be made to “Hlongwane” in January 2006, although it did not state its size. The Liechtenstein documents, however, also disclose an earlier payment of $500 000 to Hlongwane’s Shun Hing on February 16 2001.