Julius Malema: ‘I live on handouts’ 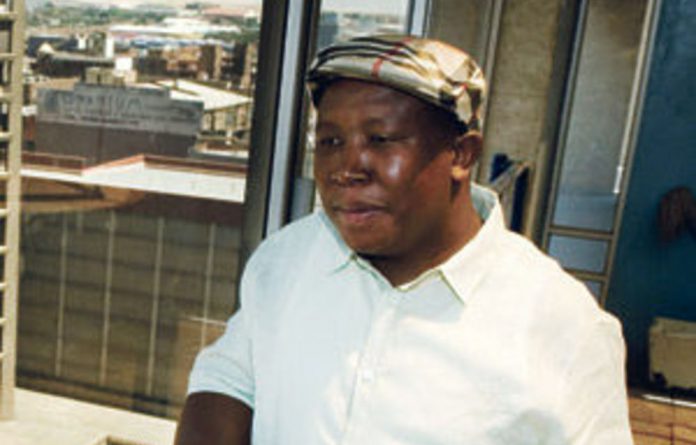 Matuma Letsoalo and Rapule Tabane visited controversial ANC Youth League president Julius Malema at his Sandton home this week to quiz him about his unexplained riches and his war with journalists, Helen Zille and Pravin Gordhan.

In his political overview at the recent ANC national executive committee (NEC) meeting, President Jacob Zuma strongly criticised ANC Youth League leaders for undermining his authority. Were you surprised?
Zuma is not raising concerns about the youth league for the first time. He has always raised concerns and engaged the youth league where he felt he was not comfortable with ­certain statements.

To me, the president’s input to the NEC was more of an internal debate, and in the internal debate we have always asked for people to be honest and articulate so that we get to know what other people think of others in the ANC.

There was no shock. I stood up there and I responded. I clarified the statement of the youth league and we agreed, we moved forward. That’s why today the youth league is not in the newspapers [or being] asked to retract or apologise.

Why did your attack on Finance Minister Pravin Gordhan for under-resourcing the National Youth Development Agency go as far as saying he did not understand the ANC and was an unelected ANC leader?
The youth league was raising its frustrations with the ministry of finance. We simply could not and still do not understand why the minister of finance would not appreciate that we are sitting on a ticking time bomb in relation to young people.

Seventy-five percent of the unemployed in the country are young people. President Zuma in his State of the Nation speech dedicated [a lot of his time] to youth development. The budgeting should have been in line with what the president said [there].

We accept the criticism that says “perhaps you should have raised the matter internally”.

But we stand firm that there is reluctance on the part of treasury … and we are fighting [that]. We think we need to put more pressure on Gordhan to accept that we have a problem.

If you look at people who are protesting, it’s young people. Where do these young people come from? They come from communities because they have nowhere to go. They have got time to be running on the streets and burning tyres.

You have insinuated that people in the South African Revenue Service (Sars) are working with some ANC leaders who do not want Zuma to be president?
It’s possible. We have in the past experienced institutions of the state being used to further political factional battles. It would not be for the first time and that’s why now we must nip it in the bud, because it is the same situation which led us to where we were before Polokwane. We don’t want a repetition of that, where institutions of the state are used to further political battles.

Don’t you think it’s fair to ask how you have accumulated your wealth at such a young age?
It’s very fair. But write facts. What the media did [showed] it was never interested in the facts. I am not rich. I do not have millions as reported. All my houses have got bonds. They are financed by banks. I’ve never got any lucrative tender from anybody, including the company called SGL.
I live on handouts most of the time. If I don’t have food to eat, I can call Cassel Mathale [premier of Limpopo] and say: “Chief, can you help me? I’ve got nothing here.” I can call Thaba Mufamadi, I can call Pule Mabe [ANCYL treasurer general] or Mbalula. They all do the same with me. That’s how we have come to relate to each other.
That’s why at times you can’t even see our poverty because we cover each other’s back. As comrades, we have always supported each other like that.

The question is whether you have used your influential position as youth league president to lobby for business for people who are close to you.
You must go and refer to the years they refer to and look at who was in power at that time. Sello Moloto [former Limpopo premier] was running that government there and he did not want me at all. Cassel just came in now and I’ve never got anything under his regime.

What I am asking for is that, if there is anybody with concrete evidence that I have manipulated tender processes, that person must report me to the police … And I’ve also asked that the leadership of the state, be it treasury or police, if they go to my account and find millions, they must take those millions and put them into institutions that can help children of the poor.

I’ve got no millions. If there is anything I must sign with whomever to go and search my account … and if that person discovers millions, he must take those millions.

You have now opened a new war front — with journalists who are reporting about you. Why is that?
Journalists get information through illegal means and sometimes without even verifying they go and write. What I have been subjected to in the last four weeks or so was just a personal attack on me without verifying the facts.

So we said: “Comrades, we need to know who these people are and what are their interests.” That’s how we came across the information about Dumisane Lubisi [City Press investigations editor]. Since then information about many other journalists has been coming from people who drop information at our offices.

Corruption must be fought everywhere … It must be exposed so that people don’t compromise journalism as a profession. Instead of journalists rising in support of the youth league to expose corruption, they defend each other through an unwritten rule that you can’t write about another journalist, which is wrong.

Journalists can be bribed. Payola is too much among journalists. As we speak, there is a Sowetan reporter in Limpopo who was suspended on allegations of corruption.

It’s wrong to intimidate journalists by saying you will investigate them if they write stories about you. I am not investigating journalists. Where corruption manifests itself, whether it is a journalist [or not], it must be confronted. Unethical journalism must be exposed.

Are you not concerned that the song Bulala Amabhunu could be interpreted as racist and anti-white?
I have been singing the song for nine years. The tendency is to use everything to discredit the youth league and create unnecessary fear among white minorities. But you should know that these people undermine the intellectual capacity of African masses.

Which people?
These people who are saying we want to kill white people. They think we can’t think. The question I have always asked them is: “Why, when President Zuma said we must give him his machine gun [Awuleth Umshini Wam], nobody took the machine gun to Zuma? Our people understand the importance of the song, especially when we commemorate days like Human Rights day or Sharpeville day …

Through songs we have the imagination of what our people have gone through in the same way that they remind themselves about the Anglo-Boer war when they sing about General de la Rey.

Why is Helen Zille [Democratic Alliance leader] not taking Collins Chabane to court because he has recorded this song? Why is the DA [or] AfriForum not taking Blondie Makhene to court?

Don’t you think that you are fuelling racism in the country?
Race — it’s a national question. We are still divided along racial lines. The economy is growing and still benefiting people along racial lines. The gap between the poor and the rich is widening and it’s racialised. Let’s confront the issue. The more we talk about it, the more we are going to accept that there is a problem … Why have they never organised a march to demand that farm workers should not be killed, if they are not racists?

The Equality Court said you must apologise publicly for your utterances about Zuma’s rape accuser. Are you prepared to do this?
I am appealing the case … Professor Pierre de Vos, a legal expert in the Western Cape, [has said] very clearly that he does not understand where the judgement came from because there has never been an intention in Julius speech to hurt. The magistrate in her judgement does not demonstrate any … intention to harm. That’s what you must prove in a matter of a hate speech … Honestly, I think the magistrate was influenced by newspapers more than law. She did not apply her mind.

Zille, AfriForum and many other organisations are taking you to court for hate speech. Are you likely to spend most of your money and time in court from now?
Zille is a coward. She has always insulted me but I never ran to the courts. Now she can’t take the heat any more. Every time I open my mouth she runs to the court. She called me inkwenkwe [uncircumcised boy], which is the worst form of insult you can give to an African man, especially coming from a white woman.

EFF leader Julius Malema says the party is preparing to govern in many municipalities from next year. It is also launching a programme to defend the rights of farm workers
Read more
Education