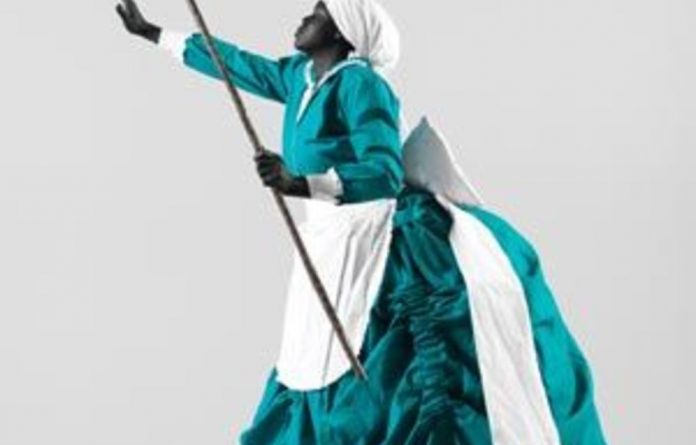 August House in Doornfontein, downtown Johannesburg, is home to a number of artists: among them Kudzanai Chiurai and Mary Sibande. As I stand in the basement waiting for the lift to take me to the third floor where Sibande lives, I see a giant sculpture of a rearing horse.

It turns out the horse was conceptualised by Sibande and made by a foundry in White River, Mpumalanga. When the sculpture is complete, it will include a model of a character from Sibande’s previous exhibition, Long Live the Dead Queen (2009). The model of a maid called Sophie, bedecked in Victorian garb, will live out her lofty, fictitious fantasies while saddling the horse.

“For Sophie, this stallion is a symbol of power and strength,” Sibande says. “Sophie has a relationship with this horse.” A horse and a maid in proximity will make for interesting metaphors about society.

This latest artwork, to be exhibited at the Joburg Art Fair, is part of Sibande’s ongoing obsession with the domestic space fantastically re-imagined.

This weekend Sibande will give a talk at the Joburg Art Fair titled “In her own image: Dressing up and dressing down of Sophie”. The talk about Sophie is really a talk about Sibande. “Sophie is me. She is my alter ego,” she says. “I am stripping away all the degrees”, says the 1982-born artist who holds a bachelor of technology in fine arts from the University of Johannesburg.

“She wants to flaunt what she has, but the problem is that she doesn’t have anything. This is just a dream. It’s me dressing up as Sophie and then dressing down.”

The beginning point of the sculpture is nothing short of revolutionary. But there’s a grim subtext to this: “This whole of idea of servitude fascinates me. These women [domestic workers] don’t want to serve anyone. But their story is the history of this land.”

Sibande’s adoption of the character, cast from her own body, is informed by the choices that women have had to make since the advent of democracy. “My grandmother didn’t have a choice, yet I have a choice — even the choice to dress up as Sophie. I have the choice to play around with the figure of Sophie. I like the idea of Sophie riding on a horse. The stunt is an impossible one, yet she doesn’t fall. She’s in control, like a lady.”

Ahead of her talk and exhibition at the Joburg Art Fair, Sibande tells me about her busy year ahead. Her work will form part of the group exhibition, Space: Currencies in Contemporary African Art, to be curated by Thembinkosi Goniwe and Melissa Mboweni at Museum Africa in May. From there she will take Sophie and whatever fantasies she may be wrapped up in to the National Arts Festival in Grahamstown. Later this year there will be a month-long residency in Sylt, in northern Germany, and then another spell in Holland.

Her apartment is full of Sophie paraphernalia — a painting here, a sculpture there and, close to the window overlooking End Street, a seamstress is busy stitching up Sophie’s costumes.

“It’s not about Sophie working for the madam any more,” she says as the interview winds down. “The horse is really a preparation for the death of Sophie.” She draws my attention to Sophie’s face: “Look, her eyes are closed. It is in these moments that she goes into these conversations and fantasies.”

Sophie has a lot of freedom now, able to contemplate endless possibilities, but I wonder whether she is free enough to imagine her imminent demise. Whether that happens or not, Sibande is not about to disappear. She is an insistent presence, just like the domestic worker figure. And while Sophie lives in the neighbourhood of her fantasies, Sibande is living them.

Mary Sibande will give a talk, titled In Her Own Image: Dressing Up and Dressing Down of Sophie, on March 28 from 10.30am to 11.30am at the Joburg Art Fair