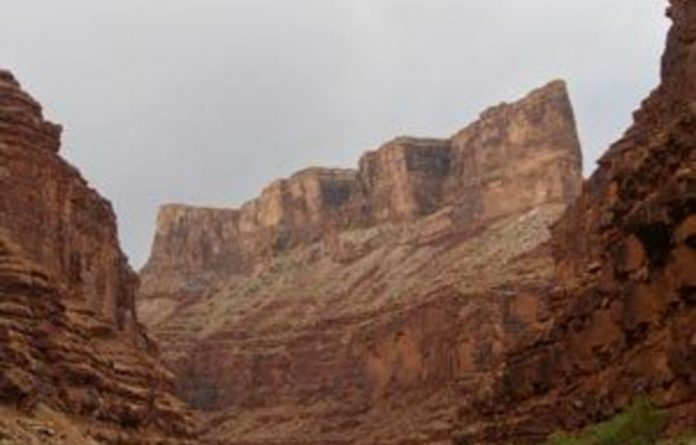 It was early July and we (me, my husband and our three teenage children) were in the middle of a 13-day, 360km trip down the Colorado River through the Grand Canyon with Arizona Raft Adventures. This is the most dramatic portion of the 2 335km-long river, which starts high in the Rocky mountains and empties into the Gulf of California in Mexico. (Theoretically, that is — sadly, little if any of that water actually reaches the sea these days because of excessive irrigation.)

On the first day the 22 of us stood at the starting point, the river beach at Lee’s Ferry, blinking at the sight before us: a long line of 6m rafts, masses of gear, an army of river guides scurrying about. This would be our world for the next two weeks.

We were a disparate group: our fellow passengers ranged in age from our 13-year-old twin daughters to a couple in their mid-70s. You can’t be shy on a Grand Canyon river trip. Not when you’re spending two weeks with two dozen strangers, floating down one of the biggest rivers in North America.

It’s the ultimate 24/7 experience: you’re on the water for five to eight hours every day and when you’re off the water you’re eating, sleeping and bathing together. Don’t get me wrong, there are ample opportunities for meditative moments, but it’s a communal trip, in one of the most spectacular environments on Earth.

Our party filled five inflatable rafts, each rowed by a guide and four or six passengers. All the gear we could possibly need was strapped into these boats: giant coolers of food, folding tables, cans of propane, pots and pans and medical supplies, a tidy toilet system, plus enough beer and soft drinks to keep everyone happy. It’s the tightest packing system I’ve ever seen, so tight that passengers ride perched on the side tubes — prime seats, after all, with padding and great views.

Few people pitched tents; most just laid a mat on the beach and slept under a sheet. At dawn, the mournful call of a conch shell signalled that coffee was ready. It would have been nice to linger over the hearty breakfasts (eggs, French toast, pancakes and lots of fresh fruit) but the guides always wanted to put in some river miles before it got too hot and soon we were pushing off, back out into the current of bubbles, dwarfed by the massive rock walls.

Rocks, rocks, everywhere: the Grand Canyon is all about geology. During the calmer stretches our guides pointed out the various layers towering above us. Terracotta sandstone, flaky grey shale, massive maroon cliffs streaked with black — I kept straining my neck gazing up at the steep walls closing in on us. Bighorn sheep picked their way up steep hillsides and sometimes water trickled out of the rock itself, nurturing lush hanging gardens.

It was brutally hot. Midsummer temperatures can soar above 43°C, and the guides encouraged us to cool off by jumping off the boat midstream. Tightly buckled into life jackets, we’d fling ourselves into the mocha-coloured water, only to thrash to the surface, gasping from the shock of the 5°C water.

Riding the rapids in the Grand Canyon is a Disneyland-ish experience — one second you’re plunging straight down into the trough of a wave, the next you’re getting drenched with cold spray as the boat shoots up and over the crest. It’s a white-knuckle rollercoaster ride that has people screaming with the thrill of it, and even an anxious mother like me can forget to fret about her children during the adrenaline-fuelled ride. Only at the bottom of each rapid did I turn around to make sure my kids were safe.

Which brings us back to Ed’s rules. The only one who violated them during the trip was me. We hit one rapid at the wrong angle and the boat rose up and pretty much ejected me into the foaming madness. For the next 45 seconds I got sucked down and spun around and finally spat up into sunlight, gasping for air. Was I scared? A little. Exhilarated? More than I’ve ever been — and my main wish was to go back and do it again.

No trip to this area is complete without a hike up into the side canyons. Some are hot and dry and require a bit of rock scrambling.

By far the most mesmerising hike was up Havasu creek, which runs a milky, aquamarine colour from the travertine mineral deposits. The path wound through jungly thickets; paradisiacal gardens spilled from moist cracks in the rock. We hiked more than 6km to Beaver falls, where a succession of calm pools provided an afternoon of swimming in sharp contrast to the hot, stark beauty of the canyon itself.

By the time we rowed the last stretch, towards Diamond creek, our clothes and hair held about a pound of silt each, but nobody cared. Some people were ready to return to civilisation; others, like my husband, wanted to drive back to the start and do it all over again. I welcomed the chance for a shower, but the trip left me with a desire to run away and become a river guide.

“There are just two rules,” I imagined saying to my passengers. “Rule number one …” Maybe some day. —