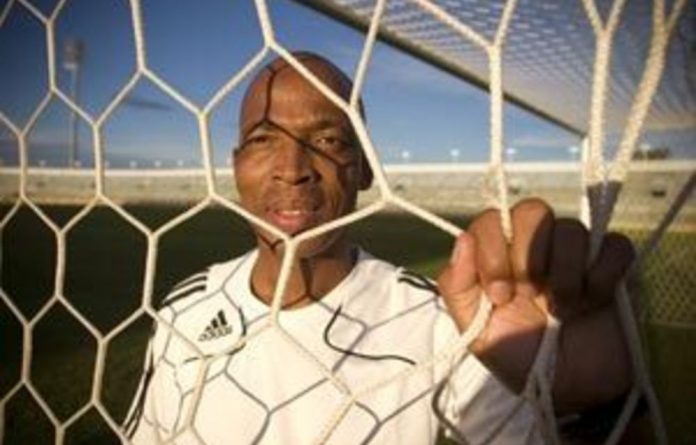 It was back to school for me this week, old and big as I am. Imagine me sitting in a corner on a small chair at a desk among grade eight learners from Tsoseletso High School in Bloemfontein.

Fortunately, I was not part of the class, because I was as clueless as the boys who sit at the back copying their mates’ homework.

But this southern Sesotho class is being taught by the ever-serious Enock Molefe, South Africa’s only assistant referee officiating at the 2010 Fifa World Cup. His counterpart, Jerome Damon, is also on the referees’ panel for the World Cup. They are both teachers.

“Where is my homework?” is the first thing Molefe says to his students, who refer to him as ntate (father), and not teacher or meneer, as is the norm.

Since Thursday Molefe has been in the Democratic Republic of Congo, where he officiated with Damon in a CAF Champions League match.

Molefe is passionate about teaching. You can tell by the way he interacts with his learners, always encouraging them to participate. He emphasises that the learners should look neat and always stand up when they speak to him.

“Next time you will not come to my class with that hair,” he says to a boy with a shorn head.

The school principal, Tshediso Motlometsi, describes Molefe as a dedicated and passionate teacher. “Our motto is discipline and commitment and that’s what Molefe has. He has passion for what he does, which is why we are so proud of him. Before he goes on his refereeing assignments he makes sure the kids get their homework for the week.”

A man with a plan
Motlometsi continues: “And when he comes back he arranges extra classes for the pupils and makes sure they do not fall behind. Molefe always has a plan and he organises our sporting activities for us. We are blessed to have him in our school.”

A bell rings at about 2.15pm, signalling the end of classes for the day. But for Molefe it indicates the beginning of another section in his life — being an assistant referee.

He keeps me waiting for about 30 minutes while he packs his bag and attends to teaching matters.

On his return we pick up his child at a nursery school and then drive to his home in Mafoora Phase Two. We pull up at a shack and he parks his Mercedes-Benz in the shade. Along the way he speaks about the challenges he has had to face in life and when I see the big corner shack I think this is one of them — a Fifa referee driving a Mercedes-Benz and living in a shack. Big houses surround the shack.

It turns out this is where he parks his car before going to the gym.

He ushers me into his beautiful home, but insists that I wait for him in the outside room. This is not an outside room — it’s a two-bedroom house with a living room sporting his medals, a Kopanya football, football memorabilia and trophies. The first one in the line of sight is the 1998 Iwisa Maize Meal final medal between Kaizer Chiefs and Orlando Pirates.

Reliving the memory of that game, Molefe says: “This was my first ever Soweto derby and we didn’t know that we were going to officiate in the match until lunchtime because Iwisa Maize Meal [now the Telkom Charity Cup] is a one-day competition. I had a good game and that was when my career started as a well-known assistant referee.”

Like any other child growing up in a township, Molefe played as goalkeeper, defender, midfielder and striker — against the likes of Lucas Skhosana, Jeffrey Lekgetla and Simon Kgopane. His love for refereeing began in 1985 during school matches.

‘I have made my mark’
“We had a problem with referees and when there was no referee the home team would have to pick one. We picked kit managers and our reserve players, but it worked against us because the guys didn’t know anything about football.

“At some point, as captain of the team, I had confidence in the guys [to play without me] and decided to blow the whistle and that was the beginning of greater things. From 1989 I concentrated on my refereeing because I couldn’t be registered as a player and referee at the same time. In 1992 I started getting recognition and officiated in National Soccer League second division matches.”

Molefe has featured in the Soweto Derby more than 11 times and in more than 13 Cup finals and friendly matches, including the Vodacom Challenge and the Telkom Charity Cup. He broke on to the international stage in 2000. In 2005 he was part of the first team of African referees to officiate at 2006 World Cup qualifying matches in Europe. He has also officiated at three Africa Cup of Nations tournaments, the 2006 Fifa World Cup in Germany and the 2006 Fifa Club World Cup in Japan, among others.

His biggest disappointment came in 2007, just before the under-20 Fifa World Cup in Canada, when he and Damon were sent back home after their partner, Simphiwe Jibiliza, failed a fitness test. Had they featured in the tournament they would each have got about R107 000.

“Can you imagine that embarrassment? Fifa stripped us of its blazers. That could have been the end of our refereeing careers. But it’s part of life and we have to move on,” he says, shaking his head.

To date no other assistant referee has filled the gap Jibiliza left. “It’s sad because we should be three instead of two. But I have done it all in refereeing — the only thing I’m waiting for is the World Cup, because it doesn’t get bigger than that.

“I have made my mark and my cycle is complete,” Molefe says.