Tuvalu to Times Square: Landmarks off for Earth Hour 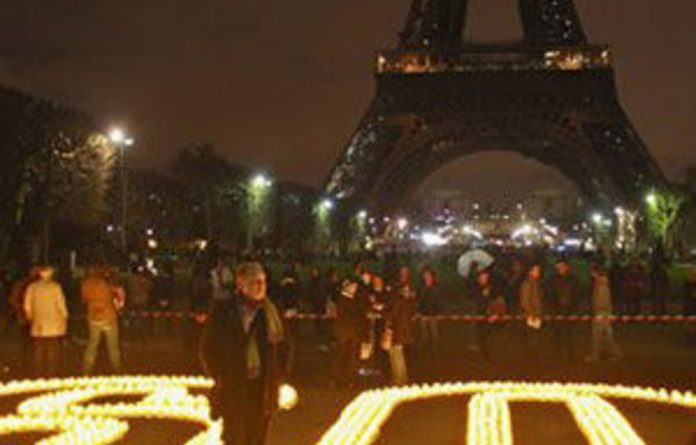 The symbolic one-hour switch-off, first held in Sydney in 2007, has become an annual global event and organisers World Wide Fund for Nature said they expect this year’s to be the biggest so far.

The remote Chatham Islands was the first of more than 100 nations and territories to turn off the power at 8.30pm local time, in a rolling event around the globe that ends just across the International Dateline in Samoa 24 hours later.

Tiny Tuvalu, which fears being wiped off the map from rising sea levels, tried to go carbon-neutral for the event, pledging to cut power to its nine low-lying Pacific atolls and asking car and motorcycle owners to stay off the roads, WWF said.

Far to the south in Antarctica, Australia’s Davis research station pledged to dim the lights.

As the blackout hour moved across the globe, London’s Big Ben and the Paris’ Eiffel Tower and Arc de Triomphe flipped the switch. In New York City, the Empire State Building and Chrysler building went dark, as did the Times Square theatre district and the United Nations building.

“As we watch the lights go out from continent to continent, let us reflect on the fragility and importance of our natural heritage and pledge to protect it for a sustainable future for all,” United Nations Secretary General Ban Ki-moon said in a statement.

In Los Angeles, the lighted pylons at the entrance to Los Angeles International airport will go green for an hour, then dark during Earth Hour, according to airport officials.

Event co-founder Andy Ridley told Reuters that 126 countries and territories had so far signed up, with thousands of special events scheduled, including a lights-out party on Sydney’s northern beaches and an Earth Hour speed dating contest.

The number of participants is significantly up on 2009, when 88 countries and territories and more than 4 000 towns and cities took part. Organisers have estimated between 500-million and 700-million people were involved last year.

In Singapore, more than 1 000 people gathered for an Earth Hour carnival in the city centre to watch the lights go out at office towers, hotels and other landmarks.

However, lights could still be seen from some buildings and construction sites, disappointing some in the crowd.

“I’m disappointed because most of the buildings’ lights are not switched off,” said Mat Idris (26). “I had expected more support from companies,” he added.

Thousands, many of them wearing black Earth Hour T-shirts, joined the main switch-off event in the Philippine capital Manila at the sprawling SM Mall of Asia.

About 15-million Filipinos were expected to participate, according to WWF, to save the equivalent of five million pesos (nearly $110 000) worth of electricity.

Taipei 101, the world’s second tallest building, turned off all exterior lights and persuaded 99% of its tenants to do the same for an hour, the tower’s spokesman said.

“There is real frustration with the politics around climate change,” Ridley told Reuters.

Business had shown strong support, he said, including the world’s major hotel chains, which he said are responsible for a significant chunk of global emissions.

In India, Delhi’s Red Fort will go dark, as will the pyramids and the Sphinx in Egypt and Rio de Janeiro’s Christ the Redeemer statue.

Lights were also scheduled to go out over all the bridges over the Seine in Paris and London’s Buckingham Palace and Tower Bridge, while in the United States, more than 30 of the 50 state governors have lent their support.

Some, though, criticised the event.

“To hold a candles-and-champagne party indoors, on the mildest night of the year, for just one hour, shows that the whole thing is green tokenism,” said Viv Forbes, chairman of climate change sceptic group the Carbon Sense Coalition. – Reuters