Tales of doom far too tall 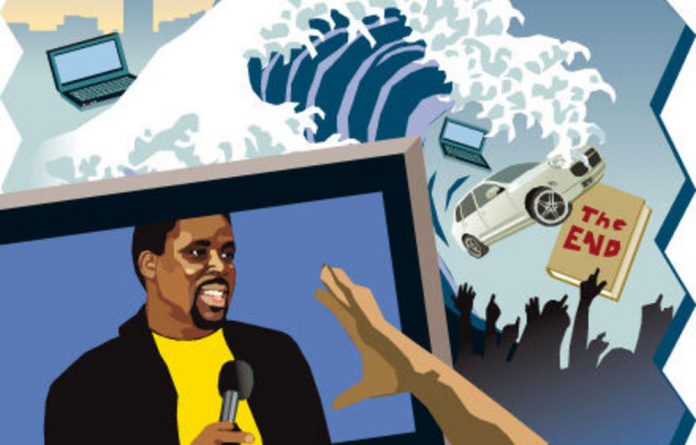 The recent news that the European Union and United States would extend sanctions against Zimbabwe for another year raised nary a murmur from the average Zimbabwean, weary if unsurprised about being a pawn in a bigger political chess game.

Instead, as is their wont, Zimbabweans knuckled down and got on with the “business of survival”, of which, by default, they are now masters. To most there is a schizoid aspect to the sanctions; the West saying they are targeting and hurting the ruling elite and the rulers blaming the collapse of the economy on them. The working masses and the unemployed know better than to agree with these simplistic mantras.

The response from the chattering classes — the NGO-funded, 4×4-driving, laptop-carrying crowd always giving “position papers” devoid of solutions to the Zimbabwean “situation” (a cottage industry in Zimbabwe that needs an article on its own) — was interestingly muted.

What exercised their minds was a prophecy, a rumour, it turns out, by televangelist TB Joshua that a million-plus Zimbabweans were going to perish on the first Saturday of March 2010.

Depending on your source, the people were going to meet their destiny by way of a flood — eerily biblical — or an earthquake. The latter was particularly apt in the wake of the Haitian and Chilean quakes. Never mind that the figure proffered represented 8% of the Zimbabwean population — or, closer to me, it meant the total population of my hometown Bulawayo — and sounded nonsensical even to the eternal doomsayers.

I am not a fan of these latter-day prophets and am healthily sceptical about the “miracles” they perform. My scepticism is not helped by the fact that when I’ve taken a cripple or someone wanting exorcism from the drink demon or sexual addiction — the “in” affliction — to a healing service, not once have I been called forward with my patient. I won’t mention my college days when we would go to the “crusades” — as they were then called — with this coterie of “deaf-mutes and the blind” and would not make it to the podium even after sweet talking our way backstage. The above cemented my distrust of these snake-oil salesmen.

Now, I don’t know the man and will not judge. But down at my local, the Jock and Saddle, guys who’d heard about the “Prophet” were more than eager to fill me in. He had, the guys told me, prophesied the deaths of Michael Jackson, Brittany Murphy and President Mwanawasa. Why, they said, he had even told Marlon Jackson, MJ’s brother, of the pop star’s fate — but was ignored. The inevitable question of the “prophet’s” nationality came up — Nigerian. I had that sinking feeling and thought, here we go again, one of those guys who gives Nigeria a bad name.

Knowing the penchant of the boys for being poetic with facts when the chilled intoxicants are flowing, I decided, thanks to the omnipotent internet, to do my own check on the “prophet”. I was gob smacked!

If his biography on the net is to be believed, he is of mystical birth. Joshua allegedly remained in his mother’s womb for 15 months before he was born. In hospital his mother was allegedly warned by a pastor not to have an operation because God was busy preparing the child in her womb. During his naming ceremony seven days after birth, a big stone was said to have flown from where workers were drilling a borehole, pierced the roof where people were celebrating and landed where the baby was placed. The stone missed him, narrowly. It is also said that a sage had predicted his birth a century earlier. Echoes of Jesus’s birth, you non-believers!

According to the net he is indeed a “prophet of doom”, as in his biography it is further said that apart from the prophecies of the death of Michael Jackson and others named above, he forecast the cyclone in Burma, the death of US Senator Edward Kennedy and the crash of a Boeing 777 at Heathrow in the UK, among other disasters. Granted, the Zimbabwean catastrophe did not come to pass and his numerous supporters have come out and rubbished the “irresponsible” rumour.

I will not begrudge the brother prophet his powers, but I wonder why, in all these prophecies, there is no good news.

It would be nice to be told, for instance, when sanctions against Zimbabwe will be lifted, or when our cricket team will be allowed to play Test cricket again.
Off goes my name from the Christmas card listing of my Pentecostal brothers.

Jabulani Mlotshwa is a business executive in Harare

What does the decade-old “Congo-case,” involving two Norwegian mercenaries, tell us about residue coloniality in Scandinavia?
Read more
Africa

Speaking out against D’banj

After accusing the Afrobeats superstar of rape, Seyitan Babatayo was arrested
Read more
Advertising
Continue to the category
Politics