ANC to take FF+ to court over Malema campaign 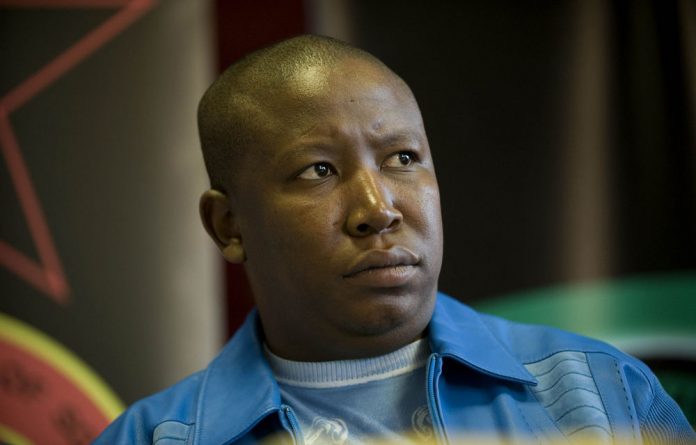 The African National Congress (ANC) will file an application in the Equality Court to complain about the Freedom Front Plus’s (FF+) “prosecute Malema” campaign, the party said on Tuesday.

“[The application will] test whether the publicly announced “prosecute Malema” campaign by the FF+ constitutes real hate speech or not,” ANC secretary general Gwede Mantashe told the media after a meeting of African National Congress officials on Monday.

“We also remind ourselves that part of our ugly history is that when the right-wing groups started an aggressive propaganda about individual members of our movement in the part, such members ended up being assassinated,” Mantashe said.

He cited examples such as the Pebco Three and the late Chris Hani.

“We are hoping that there is no attempt to create such an environment around the young man, Malema, irrespective of the irritation we may be having with him.

Driven by hatred
“That [FF+ campaign] in itself is a campaign driven by hatred and that is the ban that we want on these institutions that are so quick to declare things as hate speech, whether it is a reflection of a bias or it depends on who is sitting on the bench to hear the case, so we must actually stretch this terrain to the limit.”

Mantashe also expressed concern about the Pan African Congress (PAC) Youth League saying that Malema will be found either in a hospital or a mortuary.

The PAC youth made the comment after Malema insisted that the Sharpeville protest against pass laws in 1960 was organised by the ANC and not the PAC.

Mantashe said it was a fact of history that the PAC did organise the Sharpeville and Langa protests.

At the time when the comments were made the ANC declined to comment on its position.

“It is a fact of history … there is no need to dilly dally about that,” Mantashe said.

He said it was not the ANC’s responsibility to talk about other political parties and that the party could not speak on behalf of the PAC.

He urged law enforcement agencies to probe the threat against Malema.

He argued that the PAC youth wing’s comments against Malema were not just hate speech but a “public declaration of the intention to kill”.

Mantashe added that he did not believe Malema was a victim of a “witch hunt”.

“Is Julius a victim of a witch hunt? No, that is not what we are saying.

“That is why… we have raised the question of irritation twice.

“That doesn’t make him a victim of a witch hunt. It means that there is reality out there of statements that irritate many people, but how do you deal with them in a normal society? In a democratic society? That’s the question that we are raising.”

He added that the party would defend itself in court.

“It is upsetting that the senior leadership of the ANC, in the person of Gwede Mantashe, is trying to defend the indefensible.

“To have a campaign, which asks that an end is put to the performance of the ANC Youth leader who goes from platform to platform and makes himself guilty of hate speech and incitement of people, declared as hate speech, borders on the absurd,” the FF+ said.

The party’s campaign includes a petition in the form of a letter to President Jacob Zuma requesting that Malema be disciplined, removed from his position and investigated for tender fraud and tax evasion.

On the petition page is a picture of Malema wielding a weapon and under the headline “Accused: Julius Malema”, the party writes: “… It has become time to publicly protest against Malema.

“The objective is to obtain as many signatures as possible so as to send a significant message to the ANC that Malema is not welcome in our midst any longer.”– Sapa

Telemedicine in Africa is currently limited by the availability of basic infrastructure, but, considering the lack of doctors in rural areas, it is a vital component in addressing the continent’s healthcare needs
Read more
Coronavirus

Amid the headwinds created by the Covid-19 pandemic, it’s time the Aloe ferox, which survives in dry, harsh conditions, is nurtured — but the options are limited
Read more
Coronavirus

Senior South African politicians have not been spared the coronavirus. What happens if the head of state is not well enough to be at his desk?
Read more
Advertising
Continue to the category
Coronavirus