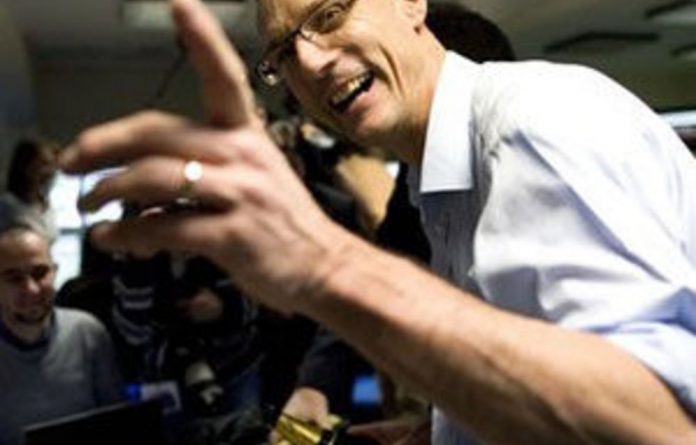 Scientists at the world’s biggest atom smasher near Geneva on Tuesday started colliding particles at record energy levels, opening a new era in the quest for the secrets of the universe.

The European Organisation for Nuclear Research (Cern) said it had unleashed the unprecedented bursts of energy on the third attempt, as beams of protons thrust around the 27km accelerator collided at close to the speed of light.

“This is physics in the making, the beginning of a new era, we have collisions at 7 TeV [teralectronvolts],” said Paola Catapano, a Cern scientist and spokesperson, referring to the record energy levels achieved.

Cern director general Rolf Heuer could barely contain his excitement by video conference from Japan: “It is a fantastic moment for science.”

The success came after a faltering start at the giant €3,9-billion machine under the Franco-Swiss border near Geneva, which is aimed at unravelling some of the outstanding secrets of the universe.

But the third attempt triggered collisions among the 20-billion protons in the Large Hadron Collider (LHC) at 11.06am GMT, creating powerful but microscopic bursts of energy that mimic conditions close to the Big Bang that created the universe.

“We’re within a billionth of a second of the Big Bang,” Cern spokesperson James Gillies said.

Cheers and applause erupted in separate control rooms around the huge ring as the detectors recorded the collisions of sub-atomic particles on computer screen graphs.

“This is really an emotional moment,” said Steve Myers, Cern’s director for accelerators and technology.

Myers had likened the attempt to firing needles from either side of the Atlantic and getting them to collide half way, while the particles sped around the ring more than 5 000 times a second.

The new stage, dubbed “First Physics”, marks only the beginning of an initial 18- to 24-month series of billions of such collisions.

The LHC ground to a halt with a major breakdown within days of its launch in 2008.

But the huge scientific experiment then passed several groundbreaking milestones since it restarted from repairs last November.

Dark matter
Scientists around the world will sift through and process the data on a giant computer network, searching for evidence of a theorised missing link called the Higgs Boson, commonly called the “God Particle”.

“In this kind of physics, what’s important in order to observe new phenomena is to collect statistics,” said Cern scientist Despiona Hatzifotiadu.

“It will give us a clue of how we were created in the beginning,” she added.

The experiment also aims to shed light on “dark matter” and subsequently “dark energy”, invisible matter or forces that are thought to account together for 96% of the cosmos.

At this stage the LHC is still running on only partial power. It is designed to run collisions at twice the current energy — 14 TeV, equivalent to 99,99% of the speed of light.

Cern is aiming to cross that threshold with the giant, cryogenically cooled machine after 2011.

At full power the detectors in cathedral-sized chambers should capture about 600-million collisions every second among trillions of protons racing around the LHC 11 245 times a second.

The decades-long attempt by Cern to observe and understand mysterious forces has inspired Hollywood in recent years, with the fictional blockbuster Angels and Demons.

The venture has also attracted sceptics, especially in Germany and the United States, who claim that the organisation is tampering with forces that might suck the world into a black hole, or generate destructive theoretical particles called strangelets. — AFP