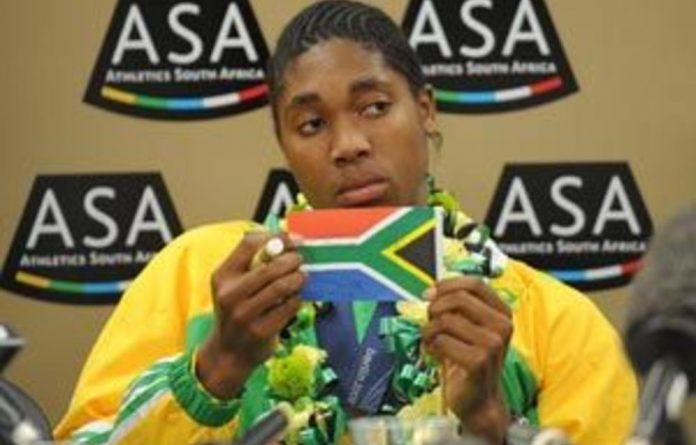 Caster Semenya, the world 800m champion, on Wednesday claimed she would return to competition this season and accused the world governing body of damaging her career and infringing her rights by not bringing its gender verification tests to a conclusion.

Breaking her silence on the day she was barred from competing in a local meeting at Stellenbosch near Cape Town, Semenya said the occurrences that had followed her victory in Berlin last year had infringed her human rights. “Since my victory in the female 800m event at the Berlin world championships in August last year I have been subjected to unwarranted and invasive scrutiny of the most intimate and private details of my being,” said Semenya, who has not raced competitively since.

“Some of the occurrences leading up to and immediately following the Berlin world championships have infringed on not only my rights as an athlete but also my fundamental and human rights, including my rights to dignity and privacy.”

Semenya had not been banned or suspended by the International Association of Athletics Federations (IAAF) but said she had originally agreed not to race until it had brought its processes to a conclusion. However, the athlete said she was withdrawing her “begrudging agreement” not to compete because the processes had “dragged on for far too long with no reasonable certainty as to their end”.

After studying the governing body’s rules and taking advice from her team of legal and medical experts, who have lodged their information with the IAAF, she said she was “of the firm view that there is no impediment to me competing in athletics competitions”.

The governing body ordered the gender verification tests following Semenya’s gold medal-winning performance last August, amid questions from rivals over her dramatic improvement in times and muscular build, pitching the then 18-year-old into a media frenzy and a swirl of intrusive speculation. The South African today claimed that on her return from Berlin her representatives attempted to contact the IAAF three times to obtain the medical information it held on her and arrange to sit down and discuss “what appeared to be a very simple matter”.

“The outcome of that lengthy process was the pronouncement that I was not guilty of any wrongdoing or cheating and that I was entitled to keep my gold medal, my prize money [which has now been paid to me] and my ranking as the No. 1 female athlete in the world over the female 800m event.”

In a lengthy statement, Semenya accused the IAAF of refusing to engage with her representatives or make medical details available to her and said it had “severely compromised” her athletic capabilities and earning potential. She announced that she would return to competition this season and was in the process of identifying a series of races in consultation with her coach, Michael Seme, and advisers.

The IAAF was initially hampered in its efforts to quell the controversy by the hostility of the South African athletics governing body and the national government, which angrily claimed that Semenya had been unfairly targeted. The IAAF, facing accusations that ranged from insensitivity to outright racism, claimed at the time it had been frustrated in its attempts to meet Semenya to discuss the situation.

That changed when it emerged that the former head of Athletics South Africa(ASA), Leonard Chuene, had ordered gender tests to be secretly performed on Semenya in the run-up to the Berlin championships and then lied about it. He was forced to resign. But the IAAF, which has faced widespread criticism over its handling of the affair, has since missed a series of self-imposed deadlines to bring Semenya’s case to a conclusion.

The situation appears to have come to a head today after Semenya turned up to compete at the meeting in Stellenbosch but organisers would not give her a place, despite pleas from her lawyers and advisers.

ASA’s acting head, Ray Mali, urged patience from Semenya and her advisers, saying: “The IAAF has given the assurance of completing the medical process speedily and has requested that ASA abides by the world body’s decision not to allow Semenya to participate in track-and-field events until the process has run its course.” — Guardian News and Media 2010