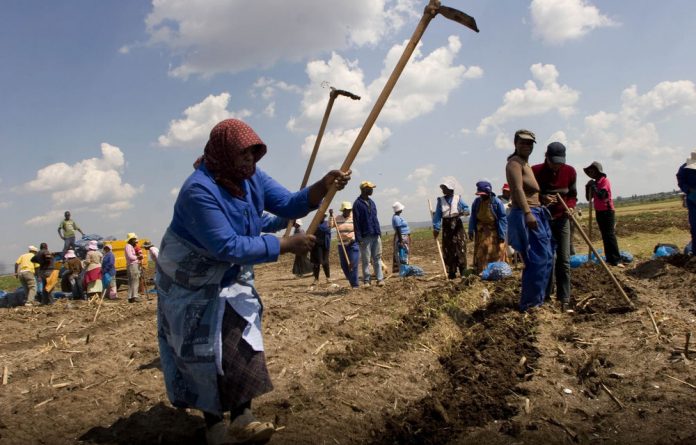 The government’s land department owes R6-billion on farms it has purchased for land reform purposes since 1994 and in financial pledges to victims of apartheid land dispossessions, the department has told Parliament.

And according to AgriSA president Johannes Möller, of the R28-billion allocated to the department for land reform in the past 12 years, the department has spent just R5-billion on buying farms.

The R6-billion figure emerged from a government answer to a Democratic Alliance question in Parliament last week.

The plan, to be set out in the Green Paper in April, will propose qualified freehold for private land, leasehold for state land and “precarious” tenure for foreign owners.

Steyn called on the department to conduct an urgent financial and land audit, as mismanagement seemed to lie at the root the problem.

“I think a lot more money is owed for post-settlement support grants intended for beneficiaries. We can’t get proper answers about their financial situation,” she said. “Things just don’t seem to add up.”

Commenting on the R5-billion spent by the department on farm purchases, of the R28-billion budgeted for land reform, Möller said: “We don’t know what happened to the rest of the money. Beneficiaries are saying the same thing as farmers – that they haven’t received their money.”

He said that AgriSA has been advising farmers not to enter new contracts of sale because the department is in arrears.

“That R6-billion figure sounds like the amount we believe is still owing on the farms purchased,” he said. “We now tell farmers that if they get an offer, they will not get their money.”

Möller said hundreds of farms purchased by the government across South Africa were “going to pieces” because of a lack of financing.

“I think that is why the department is looking at other tenure systems. We just don’t know what’s in the Green Paper and we’ll be trying to meet the department to influence the document.”

Möller said there was less anxiety now than a week ago, as Rural Development and Land Reform Minister Gugile Nkwinti had clarified certain details.

“The minister has now said they won’t change the Constitution or some of the legislation governing land reform, so I think that has restored some confidence.” (See accompanying story.)

Möller said there appeared to be a perception that commercial farmers own surplus agricultural land that could be used for redistribution and black empowerment.

“The minister said quite clearly that where farmers own land that is not being used productively, then they will probably be given a time limit to do BEE deals or make that farmland available to the government. This is the detail we don’t know yet.”

At the time of going to press, the land reform department had not responded to questions about whether it faced a cash crisis.

National issue
The land reform department’s controversial new land tenure plan would not entail any nationalisation, director general Tozi Gwanya insisted in an interview with Glynnis Underhill. But he also warned of the dangers of “militancy” from landless South Africans.

Are you saying productive farmland could be nationalised?
The minister has said there’s no plan to nationalise land. This is just an orchestrated fear that there’s a ghost outside the house. Those who don’t act like children go outside [and] find that the ghost story is fiction for children. There’s no ghost out there.

Would the new plan entail curbing property rights?
We didn’t say we plan to curb property rights; we’re inviting debate on the best way to deal with effective land reform in South Africa. We’re looking for proposals and AgriSA has made proposals about what we need to do. Some journalists are raising fears that don’t exist.

Won’t the planned reforms infringe on the constitutional right of private land ownership?
No –these reforms can be effected within the constitutional arrangements. But in a mature democracy one cannot stop dialogue about the relevance of the Constitution to a changing environment.

It’s been argued that the proposals are a smokescreen to hide the department’s bungled implementation of land reform.
We’re not hiding anything. How do we hide something we’ve admitted to by saying we have challenges in the implementation of land reform? We’ve made statements saying most projects haven’t worked. People should bring concrete proposals, enter into contracts and agreements with farmers, enter into strategic partnerships, issue share equity and mentorships.

Won’t the new proposals scare off investors?
Why would they be scared? Investors follow where they’ll get returns. That’s why McDonald’s works in China, even though China will never give [it] title deeds.

Can you explain your proposal of qualified freehold?
The weakness of our approach is that we have just two systems: freehold and communal. Those may not be the only ways to deal with ownership. We can’t treat all farmers as the same — small farmers and corporate farmers, for example, can’t be treated the same.

And proposed leasehold for state land?
[We want to] encourage long-term leases if people who farm and banks accept them for business. It’s a financial instrument and a way of encouraging long-term farm production.

Zimbabwe’s economy collapsed in the absence of secure property rights. Could it happen here?
If land is not shared among the majority of the citizens of the country, one can expect militancy from landless people. This is what may lead to disputes – antagonistic relationships between the haves and have-nots. There is a direct relationship between social and economic instability.