Mrs Vavi, the pension funds and the bribe 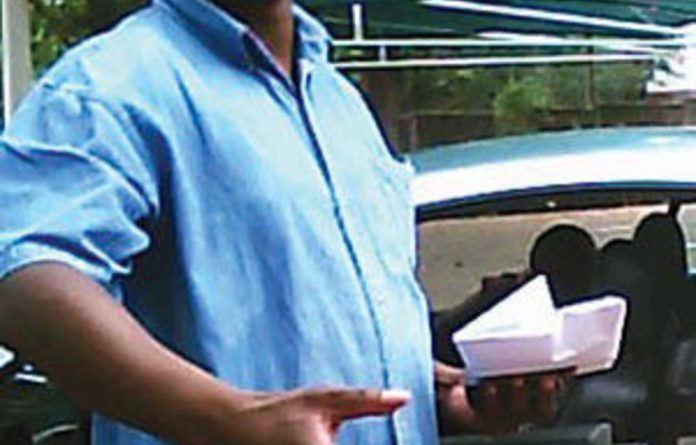 Noluthando Vavi, the wife of Cosatu general secretary Zwelinzima Vavi, is being paid R60 000 a month to market financial products to union members. And the company she acts for is so anxious to keep the deal secret that it offered the Mail & Guardian a bribe of R120 000 to suppress the story.

Veon Bock, chief executive of financial-services company Southern Africa Quantum, in fact paid R40 000 of the amount to the M&G at his offices in Randburg last Saturday and promised to pay the balance at the end of April.

The M&G recorded the transaction on video and has handed the money for safekeeping to its lawyers.

Bock had earlier told the newspaper that he would “do anything” to prevent the article being published.

Bank records and contracts entered into between Noluthando Vavi and SA Quantum show that she is paid a R60 000 monthly retainer, plus 5% commission on sales.

According to Bock, she was engaged specifically to market its products, which include pension and other employee benefits, to labour unions, particularly Cosatu affiliates.

The contract was entered into by former Quantum chief executive Abe Nduru, in August last year, some three months before his death.

Zwelinzima Vavi has staunchly denied any conflict of interest in relation to the contract, saying that this would arise only if Noluthando did business directly with Cosatu.

However, he made his own relationship with Nduru clear in a speech at the latter’s funeral in November last year, which specifically mentioned Nduru’s role in pension and employee benefit negotiations. Describing Nduru as a friend, a comrade and a confidant in the speech, Vavi said he had known him since the 1990s:

“[Nduru] started working with Cosatu during the negotiations on legislation to distribute pension-fund surplus to former and existing members of retirement funds. He was part of our negotiating team during very tough negotiations in Nedlac [the National Economic Development and Labour Council],” Vavi said.

“He further worked as a member of the trustee of the Metal Industries Provident Fund, assisting them in dealing with distribution of the surplus in that fund. The experience proved invaluable for future progress in the employee benefits industry.”

Intense lobbying
Indeed, SA Quantum appears to have profited from that background.

The company is one of two preferred service providers contracted by the Metal Industry Benefit Fund Administrators (Mibfa, which controls R70-billion of workers’ retirement funds) to provide asset management services.

Mibfa’s head of investments, Elaine Smith, confirmed that SA Quantum had been selected by employee representatives (who are Numsa officials) on the pension fund’s board of trustees, and a second company, 5th Quadrant, was selected by employer representatives. Union officials on the board pushed hard for SA Quantum to receive a disproportionately large slice of the proceeds on empowerment grounds, said a person who observed negotiations.

Two sources involved in similar processes say there is intense lobbying among trustees for these lucrative asset-management contracts, and the ability to influence their decisions is highly prized.

Bock also told the M&G that Noluthando had been instrumental in securing a contract with Teba Bank, owned by members of NUM, Zwelinzima Vavi’s former union. The contract, Bock said, involved distributing benefits to widows and orphans of deceased union members.

According to a highly placed source in Cosatu, the company also does work more directly for NUM, ranging from HIV/Aids training programmes to the distribution of surplus pension funds.

Teba Bank chief executive Mark Williams confirmed through NUM general secretary Frans Baleni that SA Quantum does business with the bank: “They [SA Quantum] provide Teba Bank [with] a pay file. Teba Bank then imports the pay file into our systems and our responsibility is to pay the money over to beneficiaries who have accounts with Teba Bank,” explained Williams in an SMS to Baleni on Wednesday this week.

Baleni said NUM had no legal agreement with SA Quantum.

“Different funds at their discretion contract the services of various fund managers and not through NUM,” said Baleni. He added: “NUM has no stake in Teba Bank; individual account-holders have a stake.”

Baleni said he had “learned today” that Noluthando Vavi has a relationship with SA Quantum, which started last year. “As far as we are concerned we do [not] see any conflict whatsoever,” said Baleni.

That perception is sharpened by Vavi’s close relationship with Baleni and Numsa general secretary Irvin Jim. Vavi personally lobbied for both to be elected for their current positions. Jim was not available for comment.

But Vavi is adamant that there is sufficient distance between him, Cosatu and Noluthando’s business activities. He said: “SA Quantum has no business relationship with Cosatu and I am not even aware of which Cosatu unions have their provident funds/pension funds administered by SA Quantum.

“I assume that some have a relationship. In that case there is no way she can influence the decisions of the provident fund boards in terms of where they invest their money or who should administer their provident funds.”

Confronted with his efforts to bribe the M&G to suppress the story, Bock reversed his earlier comments, claiming Noluthando had no particular mandate to market Cosatu.

Noluthando Vavi did not respond to requests for comment.