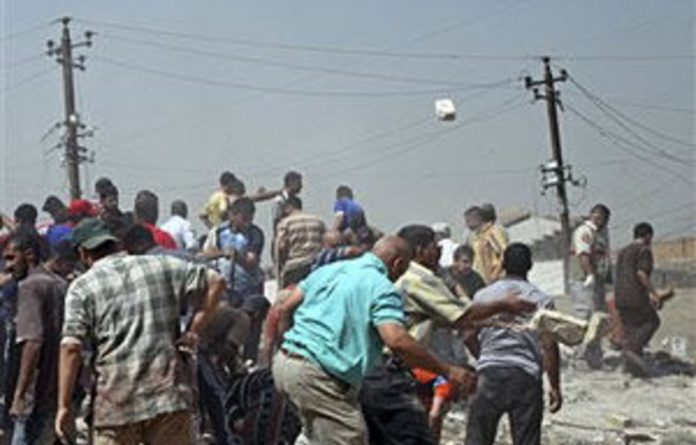 Six bombs rocked Baghdad, killing at least 35 people on Tuesday, the second time the capital has come under attack in three days, fuelling fears insurgents are making a return due to a political impasse.

The official added that 35 people were killed and 140 wounded, but several victims are thought to be trapped under the rubble of collapsed buildings.

Ambulance sirens were heard across the city as emergency service workers rushed to the scenes of the blasts, and a large plume of smoke rose from near a destroyed building in the neighbourhood of Allawi, central Baghdad.

The building housed several apartments with shop fronts on its ground floor.

Dozens of passers-by gathered at the site of the blast, close to a secondary school, to sort through the rubble in a bid to rescue survivors as military helicopters flew overhead.

“I was picking up bricks and sand to find victims, and just when I succeeded to remove the rubble, the man I saw died,” said a 25-year-old man who gave his name only as Mustafa.

“His wife came to me to see if I had seen him, and I told her he died.”

A 30-something woman was at the scene screaming, “Mother, mother, answer me!” in the hopes that her mother, trapped underneath the collapsed building, would respond.

An army officer in Allawi said that three days ago, two unknown men approached the owner of the destroyed building wanting to rent one of the unused shopfronts for a falafel restaurant.

“Yesterday [Monday] they brought lots of equipment, and today there has been an explosion in that shop,” said the officer, who spoke on condition of anonymity.

“We have sent someone to find the owner.”

Along with the Allawi blast, which destroyed two buildings, two bombs struck Shurta Rabiyah, in west Baghdad, while at least one detonated in Chikouk, which houses a camp for internally displaced persons in the north of the capital.

“There was one explosion at about 9:15 am in a house close to the main road, and when people rushed to see what happened, a second explosion took place in an adjoining building,” said Abu Ali, a 47-year-old shopkeeper in Chikouk.

Both the Iranian and the Egyptian embassies were hit by car bombs, while another blast struck at an intersection close to the German, Spanish and Syrian embassies.

Foreign Minister Hoshyar Zebari, who said Sunday’s attacks bore the signature of al-Qaeda, attributed those bombings to groups who wanted to derail the formation of a new government.

“This is a political attack, aimed at derailing the process, sending a message that the terrorists are still in business,” Zebari told Agence France-Presse on Sunday.

“Because of the vacuum of forming the next government, they wanted to send that message.”

Allawi, however, has accused Iran of seeking to prevent him becoming prime minister again by inviting all major parties except his secular bloc to Tehran.

Security officials had warned that protracted coalition building could give insurgents an opportunity to further destabilise the country.

The latest violence follows a Saturday attack south of Baghdad blamed on al-Qaeda in which security officials said 25 villagers linked to an anti-al-Qaeda militia were rounded up and shot execution-style by men in army uniforms.

Although the frequency of attacks by insurgents has dropped significantly since peaking in 2006 and 2007, figures released on Thursday showed 367 Iraqis were killed in violence last month — the highest number this year. — AFP