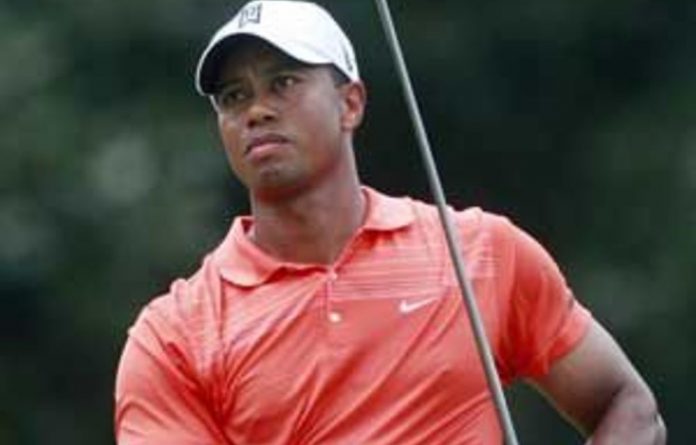 An outwardly remorseful Tiger Woods set his sights on winning back fans before a fifth green jacket as he faced a suspicious media and a sceptical public in his Augusta comeback on Monday.

Four-times Masters champion Woods was back in familiar surroundings but unfamiliar territory as he played his first public golf since his precipitous fall from grace at the end of 2009 amid tawdry revelations about extra-marital affairs.

After hiding for almost five months, it was an agonising day for the fiercely private Woods, forced to face the golf fans he had betrayed during an early morning practice round before being grilled by the world’s media about his philandering.

Having shed little light on the dark double life that had transformed him from a global sporting icon to late-night television punch line, Woods’s news conference attracted a standing room only crowd and worldwide television audience anxious for answers.

Such was the immense interest in Woods’s appearance that access was tightly controlled, spots inside the 207-seat theatre limited to those with tickets that were double and triple checked at the door.

As the auditorium filled the buzz continued to grow before falling dead silent as a smiling Woods appeared at the back entrance and made his way to the podium, stopping briefly to shake hands and receive a big hug from Ron Townsend, Augusta National’s first and only black member.

Woods claimed he was less nervous confronting the media than the massive galleries earlier that day but his nerves betrayed him when he mistakenly called playing partner Fred Couples ‘Craig’ during his opening remarks.

But for an athlete who has often given the impression he would rather undergo root canal treatment than answer media questions, Woods found strange comfort being back in the Augusta press room where many of the faces in the crowd were familiar ones, not the faceless and veracious tabloid media which has relentlessly hounded him.

“I know a lot of my friends are in here, and I haven’t seen them, I haven’t talked to them, but I’ve read their articles, and of course they have been critical of me,” said Woods, who acknowledged some reporters by first names. “They should, because what I have done was wrong.

During the riveting 35-minute cross-examination, a contrite but composed Woods fielded a wide range of questions, politely refusing to answer some and deftly side-stepping others.

The 14-times major winner discussed undergoing 45 days of treatment in a rehabilitation centre but refused to reveal for what addiction.

He admitted to receiving treatments for injuries from a Canadian doctor under investigation for smuggling performance-enhancing drugs but insisted he had never taken illegal drugs.

The 34-year-old American confirmed he had used prescription painkillers while recovering from knee surgery and an Achilles tendon problem but that he was never addicted to them.

Some subjects remained off limits
Woods revealed that his Swedish wife Elin would not be making a Masters appearance but provided few other details about the state of their marriage or the bizarre late night car accident outside his own home in Florida on November 27.

For most of the 35 minutes, however, Woods repeatedly apologised to those he had hurt, particularly his family and fellow golfers.

One of the sporting world’s most competitive figures, Woods conceded he had come to Augusta believing he can win a fifth green jacket but that championships were no longer the driving force in his life.

“It puts it in perspective; it’s that it’s not about championships,” said Woods. “It’s about how you live your life.

“I had not done that the right way for a while and I needed to change that. Going forward, I need to be a better man.

“I’m trying as hard as I possibly can each and every day to get my life better and better and stronger, and if I win championships along the way, so be it.”

Despite Woods’s mea culpa, the scandal that has swirled around him continues to pick up steam with new allegations of infidelity and gambling.

James, who says she had a three-year affair with Woods and last saw him in October, watched the golfer’s news conference with her lawyer, celebrity attorney Gloria Allred, in a room full of reporters in New York.

“He’s still a big fat liar,” said James, who shook her head and raised her eyebrows as she watched Woods take questions from reporters. “We all deserve an apology, those of us that were hurt throughout all this.” — Reuters