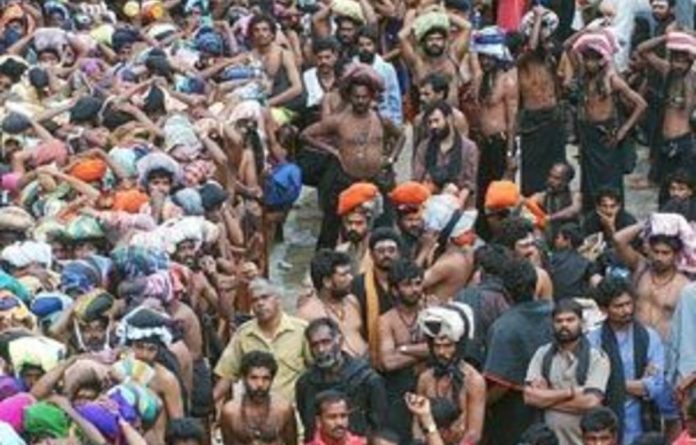 The pilgrims were winding their way slowly uphill along corkscrew-like mountain roads, heading up into the foothills of the Ghats. On one side stretched neatly manicured hillsides of tea estates, on the other, rubber plantations. Far below the cultivation terraces fell away to the flat plains, where a deep-green carpet of coconut palms stretched as far as the blue of the sea. The border between the two was marked by a thin strip of blazing white sand.

The pilgrims snaked along the sides of the roads: long files of dark, wiry men in black lungis, bare-chested and barefoot, with bundles of clothes on their heads and staves in their hands.

“We have the power of Lord Ayyappa in us,” said Sakkara Swami, the leader of one party, who was resting in the same teahouse as me, watching the other pilgrims trudge past. “The Lord gives us the strength to reach his abode at Sabarimala. He pulls us towards him.” The pilgrims explained that they were taking part in the largest pilgrimage festival in southern India.

Every year, from mid-November to mid-January, between 10- and 50-million men leave their villages in the south of the country and trek on foot to pay homage to the shrine of the demon-slaying Lord Ayyappa at his mountain-top abode of Sabarimala in Kerala’s Western Ghats, southeast of Kochi (Cochin).

Here the god, who is formed from the union of the two most powerful deities in Indian cosmology, Shiva and Vishnu, is worshipped as a celibate ascetic, meditating in remote mountain forests for the benefit of all mankind. In keeping with this spirit all the pilgrims take vows of celibacy and purity, growing a beard and eating only the simplest fruit and millet from the forests.

“We prepare for 60 days before setting off,” said Sakkara Swami. “We are strictly vegetarian and eat only twice a day, at breakfast and dinner. We don’t attend funeral rites and we must control our anger. There is no smoking, no drinking alcohol and we must sleep on our own — not even with our wives. When we set off we must travel barefoot.”

“The mind is happy,” said his friend Prakashan, who was sitting opposite, sipping his tea, “even if our feet are sore. Whatever you desire, Lord Ayyappa will make it happen.”

The shrine of Sabarimala is an extraordinary sight at festival time, alive with tens of thousands of pilgrims queuing to do darshan — catch a glimpse of the idol of their deity. But it was one of the major staging posts on the way to Lord Ayyappa’s shrine that for me was more extraordinary than the final destination.

The cult of Lord Ayyappa is notable in that it recognises no distinctions of caste or creed. All pilgrims eat and travel together; and more remarkable still, at the small hill town of Erumeli, all the pilgrims — the vast majority of whom are Hindu — pray not only at the temple but also at the town’s mosque. They do this in memory of the legendary assistance given to Lord Ayyappa by a Muslim warrior named Vavar. In a country that sometimes seems irreparably divided along lines of religion, this was something remarkable.

“Vavar was a good friend to Lord Ayyappa,” said Sakkara Swami. “He had an army and he and his fellow Muslims helped Lord Ayyappa kill the demon Mahisi and all the devils who were threatening the world.” Prakashan said: “In memory of their friendship we visit the tomb of Vavar on our way to see the Lord. Every pilgrim must stop here and seek Vavar’s blessings. This is our tradition.”

The mosque, when we finally got there, lay in the centre of Erumeli. Everywhere barefoot devotees choked the streets, haggling at the stalls selling fresh king coconuts. But the scene around the mosque was more chaotic still. Pilgrims were pouring out of a pair of ashrams opposite, covered in leaves and twigs and greenery, and painted with tiger stripes of yellow and blue. Some were wearing tiger masks, others silver crowns.

In this dress, ecstatically laughing and cheering, chanting and singing, they ran and danced rather than walked into the mosque. Here they began rapidly circling the ambulatory that runs around the mosque’s prayer hall. At one point on their circuit some of the pilgrims took the coconuts they had bought in the bazaar and threw them at a wall. The coconuts shattered and fell in pieces into a special pit below.

I had never seen anything more animistically pagan, or anything less Islamic, taking place in a mosque; but the praying Muslims within seemed quite unfazed by the screaming painted ecstatics sharing their sacred space.

“All the Muslims welcome these people,” I was told by the grey-bearded imam, Hajji Abdul Karim, who was sitting quietly with his prayer beads in a corner of the rush-matted prayer hall. “Every year at the start of the pilgrimage season we make a procession from here to the temple, where the Hindu priests receive us. Then we all go on to the church, where the Christian priests make us welcome. We have never heard of anyone opposing any of this.” “It doesn’t sound very Islamic,” I said.

“We Muslims believe in only one God,” said the imam. “But we respect all religions. The Hindus respect Vavar, and we believe also that he was a great saint. So where is the problem? They believe what they believe. But if they come here we must be hospitable and make them welcome.” “But all over so much of the rest of India you find different religions fighting,” I pointed out. “That is exactly why this place is so important,” he replied. “It’s not just India. The whole world is fighting about religion. But this is a place where you can show the light of peace, a place that brings all religions together. All human beings are equal here. There is a lesson here for everybody.”

“And no one makes trouble about this?” “No one. Why should they? In fact we all feel sad when the pilgrimage season ends and the mosque becomes quiet again. We feel an emptiness in our hearts. We are living in a world where people are killing each other in the name of religion,” the imam added as I thanked him and headed towards the door. “So we are very proud that something like this is happening here.” —