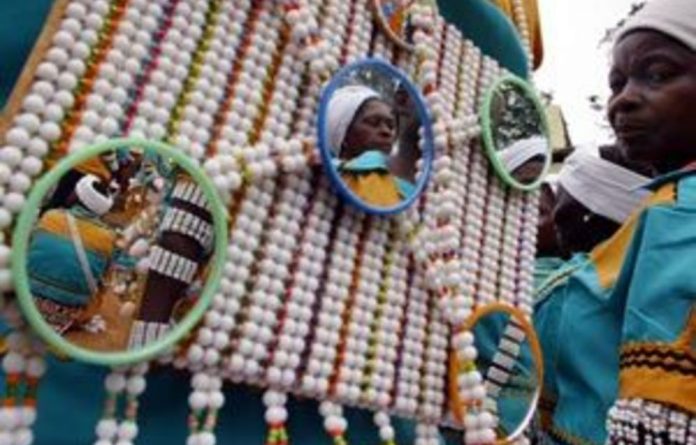 Carefully sliding a red bead onto her needle, Nocawa Carow Vuso slips it down her string and affixes to the “keeper of my heart”, a replica of an antique South African necklace.

It’s one of the old South African styles on display for the World Cup in Port Elizabeth, a city better known for its car factories than its fashion, and set to be a desperately-needed money-spinner when the June 11-July 11 soccer showpiece takes place.

The beaded necklace originally would have been made for a man by his wife. Now women like Vuso are relearning the forgotten patterns, and sometimes replacing traditional designs with football themes.

“It’s the first time I’m working on old patterns,” she said. “I’m going back to my roots. I can do what my grandmothers were making in rural areas.”

With other women from the city’s townships and from the Nomakwesi craft centre where she works, Vuso will exhibit her glass beads at the Nelson Mandela Metropolitan Art Museum.

The display is just steps from the “fan park” where jumbo TVs will broadcast World Cup matches for those without tickets, especially the games from the city’s new stadium.

“Because of the influx of international visitors, we wanted to promote beadwork in South Africa and particularly from the Eastern Cape, very different and less well known to the beadwork of Zulu or Ndebele,” said museum spokesperson Jenny Fabbri.

Little pieces of history
Part of the collection includes original pieces by ethnic Xhosa artisans from the early 20th century up to the 1960s. Alongside their display will be modern reproductions of necklaces, bags, armbands, headbands, skirts and dancing sticks — all adorned in colourful beads.

“The items will not be cheap,” exhibition curator Emma Taggart said of the reproductions. “It’s not just beadwork, but they’ll take a bit of history and will not be found anywhere else.”

Wearing beadwork designed in the villages fell out of fashion in the 1970s, as more South Africans moved to cities, converted to Christianity, and fell under the yoke of white-minority apartheid rule.

Over the last 20 years, beadwork has made a comeback, said Ndileka Qangule, director of the Nomakwesi centre which she said was created “to revive dying skills”.

“We’re in an urban environment. This is a skill that was being forgotten because it was not often practised,” she said.

“Now, what is produced is more simple. They don’t make any more complicated stitches,” she said. “They use cheaper beads from China which are not very good.”

Faced with that reality, the museum hopes to sell more contemporary items that are cheaper and more fun, like necklaces with whistles.

The women creating the beadwork also want to use the World Cup to make football merchandise that they’ll sell outside the exhibit — like beaded flags draping from pins, bags and jewellery in the colours of national teams.

“I’m a widow and my four children are waiting for me each day to bring back food. Now, it’s going to be better,” she smiled.