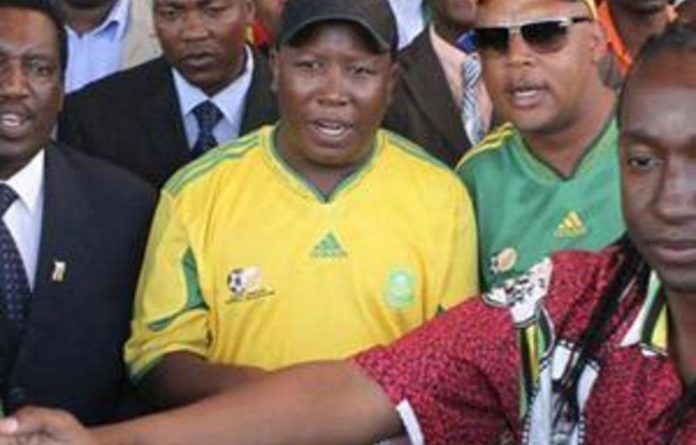 The ANC Youth League’s president attacked the media at a briefing on Thursday, calling a BBC journalist a “bastard” and an “agent”.

Julius Malema was addressing the media on the ANCYL’s recent visit to Zimbabwe.

He criticised the Movement for Democratic Change — the Zimbabwean opposition party — saying they should go back to Zimbabwe instead of working from offices in Sandton, Johannesburg.

“This is a building of a revolutionary party and you know nothing about revolution so here you behave or else you jump,” he said, speaking from Luthuli House in the Johannesburg CBD.

Fisher attempted to respond, but Malema did not relent.

“Chief, can you get security to remove this thing here?” he requested of staff present on Luthuli House’s 11th floor, the venue for most party media briefings.

“If you’ve got a tendency of undermining blacks even where you work you are in the wrong place.”

‘Bastard, go out, you bloody agent’
To which Fisher replied: “That’s rubbish.”

Malema then asked him to leave saying: “… Rubbish is what you have covered in that trouser, that is rubbish.”

“You are a small boy, you can’t do anything. Bastard, go out, you bloody agent.”

The BBC declined to comment when contacted after the briefing.

The attack was preceded by a general one on the media after Malema was asked whether he met business people on his Zimbabwean visit last weekend.

He charged that journalists were “obsessed” with him.

“You come here, you say we met with business people, meaning you did not concentrate during that visit. You know you are obsessed with wrong … sensational reporting and you are desperate to make profit and you’ve run out of skills and strategies on how to make money.

“You have become obsessed with an individual and as a result you have lost your minds. All of you, irrespective, all of you.”

He continued: “The best journalists we know, they should be ashamed of you, that you can go all out to lie about an individual because you want to sell newspapers.

“You are obsessed and obsession is a sickness. You are sick because of the style of reporting you have come to follow … you are misleading the SA population.”

Later, he invited journalists who wished to leave in solidarity with the BBC to do so, though none complied.

“It is totally unacceptable to treat a journalist that way for doing his job of asking a pointed question,” the forum said in a statement.

Sanef’s media freedom committee chairperson Thabo Leshilo, said the forum took strong exception to Fisher being sworn at “in an attempt to humiliate him”.

Leshilo said in the light of this incident, journalists might in future have to “decline invitations to press conferences of the youth league”.

The National Press Club said all journalists present at the briefing should have left in solidarity with Fisher.

“Journalists need to stick together. It is entirely appropriate to walk out should a news conference degenerate into a shouting match and should journalists be sworn at and insulted,” chairperson Yusuf Abramjee said in a statement.

“This is not the first time that Malema has chosen to attack journalists and it appears to have become a trend in the past few weeks.”

Explaining the outburst later, Malema said the youth league and its leadership could not be undermined “in our own terrain”.

Abramjee said such behaviour was “unacceptable”.

Heeding the call for restraint
Meanwhile, the ANCYL will not use the words “shoot the boer” when singing the struggle song Ayesaba Amagwala, Malema said on Thursday.

However, he added: “There is no court which can ban the song and we agree with it.

He added that the youth league would heed the ANC’s call for restraint even though it did not agree with the banning of the song.

“We will continue to sing it outside of South Africa.” — Sapa