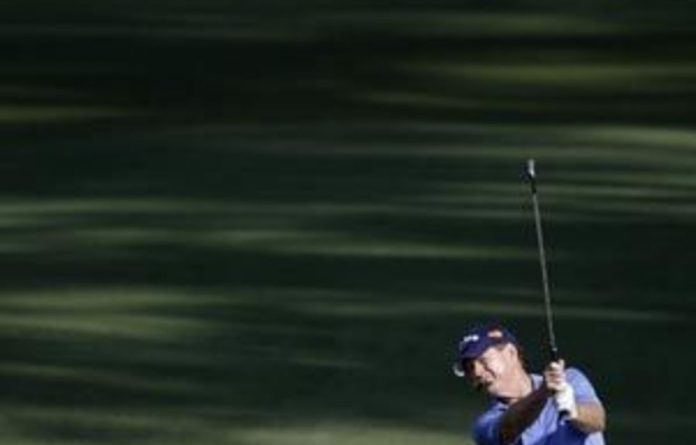 Tiger Woods returned to golf at the Masters on Thursday after a five-month layoff to deal with a crushing sex scandal while 60-year-old Tom Watson rolled back the years with his best round at Augusta National in 20 years.

Woods smacked a perfectly judged drive down the first fairway after enjoying a warm welcome back from a packed gallery around the tee. He promptly parred the hole to get his quest for a fifth Masters title off to the perfect start.

At the same time over on 18, two-time Masters champion Watson was completing a magical round of five-under 67 that gave him the early clubhouse lead.

His performance belied his own repeated assertions that he was no longer competitive over the punishing Georgia parkland course.

Watson, the oldest player in the field and the 1977 and 1981 Masters winner, made birdies at the first and third and then calmly parred the next 11 holes to stay at two under through 14 holes.

He then brought roars of approval as he added birdies at 15, 16 and 18 to bring back memories of his astonishing run at last year’s British Open where he lost out to Stewart Cink in a four-hole playoff afer missing an eight-footer to win at the 72nd hole.

‘I wanted to show him I can still play this golf course’
“I think a big part of my success today was having my son [Michael] on the bag,” he said.

“He said ‘Dad, show me. Show me you can still play this golf course’.

“I wanted to show him I can still play this golf course.”

Watson enjoyed sole leadership in the clubhouse for a short while, but he was soon joined on 67 by European No.1 Lee Westwood, World No.3 Phil Mickelson and 2009 USPGA champion Yang Yong-Eun of South Korea.

Westwood had seven birdies against two bogeys as he once again moved into contention to win his first major with what he said was the best round he had played yet over Augusta.

“You go out here, every green in regulation, I missed 7 by about that far [indicating two feet] and 13 by that far away [an inch].

“Each time I missed it the right side. Eighteen greens in regulation around here, I don’t think people often do that.”

Mickelson was out in 35 but three birdies in a row from the 13th propelled him up the leaderboard and he narrowly missed an eight-footer at the last that would have put him clear.

“It was a good day. I played well. The greens were receptive which in this wind allowed a a lot of guys to make birdies. We saw some pretty low scoring,” he said.

“It’s a good start and my expectations are high.”

Winner last week in Houston, Anthony Kim stepped in one stroke behind the leading quartet with a four-under 68.

Also enjoying a revival in his fortunes was another American in the form of 43-year-old David Toms, whose moment of glory game nine years ago when he won his only major at the PGA Championship.

Toms had four birdies in five holes from the 12th to get to four under although he bogyed the last to card a three-under 69.

“I just told myself to be patient, because you can mess up pretty quick trying to be too aggressive, whether it’s with your putting or whether it’s your iron shots into the green,” said Toms who is considering shoulder surgery later this year.

“All of a sudden I made a couple, hit a couple good shots, and boom, I’m under par.”

Woods’s date with destiny
After a morning when the action and the galleries washed out over the famed green pastures of Augusta National, the focus inevitably returned to the practice area around the first tee as Woods prepared for his date with destiny.

The fallen superstar of world sport teed off alongside American compatriot Matt Kuchar and South Korea’s K.J. Choi and his opening tee shot brought a broad smile to his face.

It was the first face-to-face between Woods and the golfing public since the sex scandal that turned his life upside down, and although the tension was palpable, Woods looked relaxed and focused as he made his way to the tee.

With the skies darkening and rain starting to fall, Woods grabbed his first birdie by sinking a five-footer at the short par-four third, but he dropped one at the seventh when his approach came up short.

He then produced his first fist pump, albeit a mild one, after sinking a nine-footer for an eagle at the eighth to get to two under, three off the lead.

Among the other favourites to don the green jacket on Sunday, Ernie Els of South Africa came in with a one-under 71, while defending champion Angel Cabrera of Argentina shed four strokes down the back nine and had to settle for a 73.

History was made meanwhile by Italy’s Matteo Manassero as he became the youngest player ever to take part in the Masters, 11 days shy of his 17th birthday.

The British Amateur champion birdied his first hole at Augusta National and, bearing a striking resemblence to the young Seve Ballesteros, he impressed by coming in with a one-under 71. — AFP