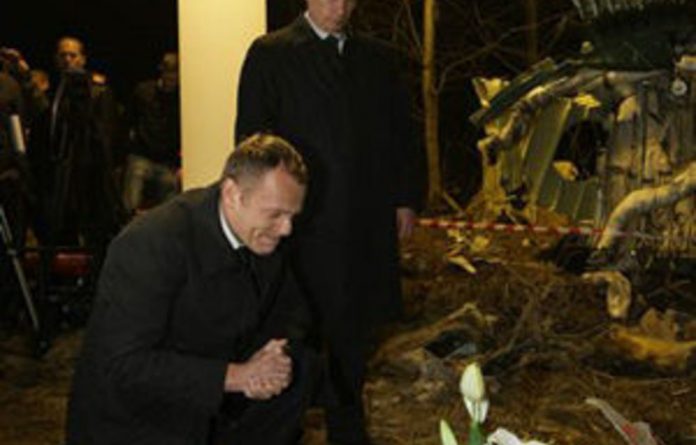 Poles were in deep mourning on Sunday after President Lech Kaczynski and many of the country’s ruling elite were killed in a plane crash.

The ageing Tupolev plane crashed in thick fog near Smolensk in western Russia on Saturday, killing all 97 people on board. Kaczynski had been planning to mark the 70th anniversary of the massacre of Polish officers by Soviet forces in a nearby forest.

Tens of thousands of mourners thronged the streets of central Warsaw through the night into Sunday, turning the avenue in front of Kaczynski’s palace into a sea of flowers and candles. In this staunchly Roman Catholic country, many sang hymns and prayed. Church doors stayed open for worshippers.

The chief of Poland’s armed forces, the head of its navy, its central bank governor, opposition lawmakers and Kaczynski’s wife Maria were among those killed in the crash.

“Today in the face of such a drama our nation stays united. There is no division into left and right, differences of views don’t matter. We are together in the face of this tragedy,” the parliamentary speaker, now Poland’s acting president, Bronislaw Komorowski said in a televised address to the nation.

Komorowski declared a week of national mourning. Poles will observe two minutes of silence on Sunday at noon (10am GMT).

Despite Poles’ deep sense of loss, analysts said the crash should not pose any serious threat to the political and economic stability of Poland, a staunch Nato ally of the United States and a member of the European Union.

Russian solidarity
World leaders expressed shock and sorrow. Prime Minister Vladimir Putin of Russia, Poland’s historic foe, told Poles: “This is a tragedy for us too. We feel your pain.”

Komorowski said he would set the date of a presidential election which had been due in October after holding talks with Poland’s political parties. Under the Constitution the election must now be held by late June.

The moustachioed, bespectacled Komorowski (58) is the presidential candidate of Prime Minister Donald Tusk’s ruling pro-business, pro-euro Civic Platform (PO). Opinion polls suggest he would have defeated Kaczynski in the election.

Tusk flew to the crash site late on Saturday, where he and Putin laid flowers together.

The pilot of Kaczynski’s plane ignored several orders not to land from air traffic control, the deputy chief of the Russian Air Force’s general staff, Alexander Alyoshin, was quoted as saying by the Interfax news agency.

Kaczynski, a combative nationalist often at odds with Tusk’s centrist government and the EU, was a staunch critic of Putin’s Russia. Putin had invited Tusk, not Kaczynski, to ceremonies last Wednesday marking the Katyn massacre anniversary.

Poles noted the irony of a crash that claimed the lives of so many members of Poland’s elite near the spot where Josef Stalin’s NKVD secret police shot dead about 22 000 Polish officers and intellectuals in 1940, wiping out much of the country’s wartime leadership.

Putin and Tusk had pledged at their Katyn commemoration last week to work to overcome such painful historic memories.

In a further gesture of Russian solidarity, President Dmitry Medvedev expressed his condolences to the Polish nation on Saturday evening in an unprecedented television address. Russia has declared April 12 a day of mourning for the crash.

Russian television showed the smouldering fuselage and fragments of the plane scattered in a forest. A Reuters reporter saw a broken wing some distance from the rest of the aircraft.

The plane was one of two Tu-154s in the government fleet, both about 20 years old. Government officials had complained about the age of Poland’s official fleet.

Poland and Russia both said they planned investigations into the causes of the crash.

Central bank continuity
The conservative, nationalist-minded Kaczynski twins had spearheaded opposition to Tusk’s pro-market economic policies and push for swift adoption of the euro. Analysts said they expected an upsurge of sympathy for PiS now but said it was too early to predict whether this would translate into votes.

Kaczynski was a one-time ally of Solidarity hero Lech Walesa and a co-founder of the right-wing PiS with his brother. He resigned from the party when he became president in 2005 but continued to support it.

While the president’s role is largely symbolic, he can veto government laws. Kaczynski had infuriated Tusk’s government several times by blocking health, media and pensions reforms.

Analysts said Polish markets would not be severely jolted.

“Although tragic, we do not believe that this event threatens political and financial stability in Poland in any fundamental way,” Goldman Sachs said in a research note. – Reuters