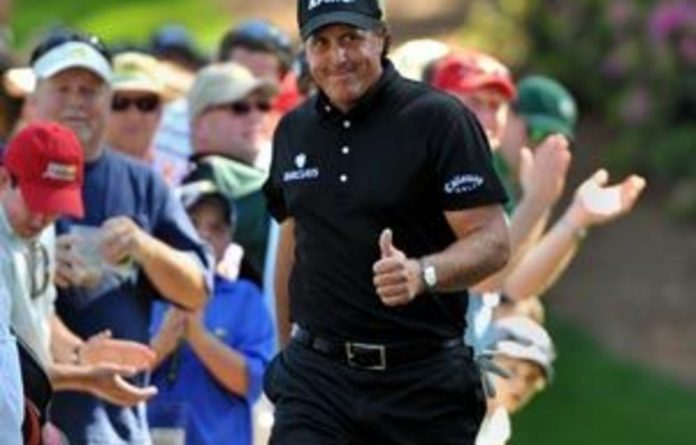 Phil Mickelson won his third Masters title and fourth Major crown in dramatic fashion on Sunday while Tiger Woods could only ponder his mistakes and wonder what might have been.

Mickelson shot a bogey-free five-under par 67 to finish 72 holes on 16-under 272, defeating England’s Lee Westwood by three strokes, in an emotional victory for wife Amy, who has been battling breast cancer for nearly a year.

“It has been an emotional year,” Mickelson said. “I’m very proud of the fight and struggle she has been through. It has been very difficult and very emotional. To be on the other end and feel the jubilation is incredible.”

Mickelson made a tearful embrace with Amy behind the 18th green. She had been unable to travel to events where he played until this week and had been bed-ridden until Sunday when she came to see him at Augusta National Golf Club.

“It means a lot to share some joy together,” Mickelson said, his voice cracking, as he was presented the green jacket symbolic of Masters supremacy. “It’s something we will remember the rest of our lives.”

The contrast was stark between fan favorite Mickelson, who took time away from golf to be with his wife and mother during their fight, and Woods, whose return this week from a five-month layoff came after a humiliating betrayal of wife Elin, with more than a dozen women claiming sexual affairs.

Woods, whose wife did not attend, struggled to a final-round 69, sharing fourth with South Korean K.J. Choi on 277, one stroke behind third-place American Anthony Kim. Woods said he did not know when he might play again.

Time to re-evaluate
“I’m going to take a little time off and re-evaluate things,” Woods said.

But when asked to judge the meaning of a week that began with Woods fearful of how fans might react to him, top-ranked Woods spoke only in golf terms, not about the path to redemption.

“I finished fourth. Not what I wanted,” Woods said. “As the week went on, I kept hitting the ball worse. I only enter events to win. I didn’t hit it good enough. Consequently I’m not there.”

Mickelson claimed a share of fourth on the all-time Masters win list, half the record total of Jack Nicklaus and one shy of Woods and Arnold Palmer.

Mickelson fired three birdies in four holes starting at the par-3 12th when he curled home a long putt. He then hit an epic approach at 13, his view of the green blocked by a tree.

Mickelson’s ball had a path to the green but the shot left him standing behind a tree. Mickelson blasted the ball 205 yards off the pine needles and just three feet from the cup.

While he missed the eagle putt, the birdie put Mickelson two atop Kim and Westwood. Another birdie at the par-5 15th gave Mickelson a three-stroke edge.

“He hit some great shots on the back nine,” Westwood said. “His second shot into 13 was incredible.”

Westwood made a birdie at 17 to keep the pressure on until the final hole but Mickelson birdied the last to complete the emotional triumph, becoming the 19th winner in the past 20 Masters to play in the final pairing.

Westwood, trying to become the first Englishman to win a Major since Nick Faldo won the 1996 Masters, suffered another near-miss in his bid for a first major crown.

Westwood was third in last year’s British Open and PGA Championship and third at the 2008 US Open.

“I just need to keep doing what I’m doing. One of these days the door is going to open for me,” Westwood said.

Kim, who began the day seven strokes off the pace, fired a final-round 65 to put himself in the hunt, hitting back-to-back birdies at 13 and 14, making eagle at 15 and another birdie at 16.

Woods has never won a Major when trailing after 54 holes, although the 14-time major champion made a mighty run.

Clad in his traditional last-round red shirt, Woods finished the front nine with back-to-back birdies to stand on nine-under, three off Mickelson’s lead.

Woods blasted his second shot off a tree at 11 on his way to a bogey, saved a par at 12 and birdied 13 but stumbled at 14, missing a six-foot birdie putt then botching a two-footer coming back for par.

Woods dropped a 14-foot eagle putt at the par-5 15th, his fourth eagle of the week to match a Masters record but still four back of Mickelson. A birdie at the 18th was too little and too late.

Choi began the back-nine drama with his fourth birdie of the day at the 10th to match Mickelson for the lead at 12-under, but he faltered with bogeys at 13 and 14. A birdie at the 15th kept Choi a threat but he could not gain ground.