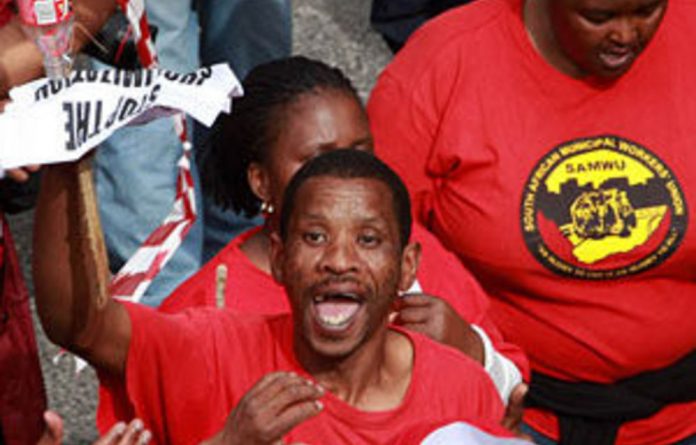 Ten people were arrested in East London at the start of the South African Municipal Workers’ Union (Samwu) nationwide strike over pay scales.

Although many of the marches around the country were reported to have ended without incident, some councils reported that non-striking workers were intimidated and marchers tipped rubbish bins into streets.

Police in East London fired rubber bullets when concrete bins were pushed into the traffic in Oxford Road, leading to the arrest of the 10, who will face public-violence charges.

Waste management workers and drivers started work late, but the city said it would hire outside contractors to catch up with the waste backlog if necessary.

Only 20 out of 230 buses did not run, with the council attributing this to breakdowns or sick leave.

However, in Johannesburg bus commuters were left stranded as Metrobus was not operating.

Memoranda of demands were handed over in Cape Town and Johannesburg.

Samwu opted for industrial action to push for a range of demands, mostly related to getting market-related salaries for municipal workers. This includes setting the pay rate for municipal managers and councillors it said were being paid above market rate.

It believes these measures would go some way to addressing corruption in municipalities, which was sparking protests against the lack of service delivery.

It said it had been trying to finalise the matter for seven years.

The South African Local Government Association (Salga) intends applying for an interdict to stop the strike on Tuesday.

It said that if it increased salaries as required, it would exceed the amount allocated to it by Treasury to pay staff, and it would not have enough money to pay for the services supplied by municipalities.

“There was no trashing,” he said.

All essential services workers, except some metro policemen who had been given special permission, were at their posts on Monday, in compliance with the law.

Accepting the memorandum handed over in Cape Town, the city’s mayor, Dan Plato, said he would attend a Salga meeting set down for Thursday in Kimberley to discuss the issues raised.

Further marches are planned around the country this week in what Sema described as an “indefinite” strike. — Sapa, Reuters