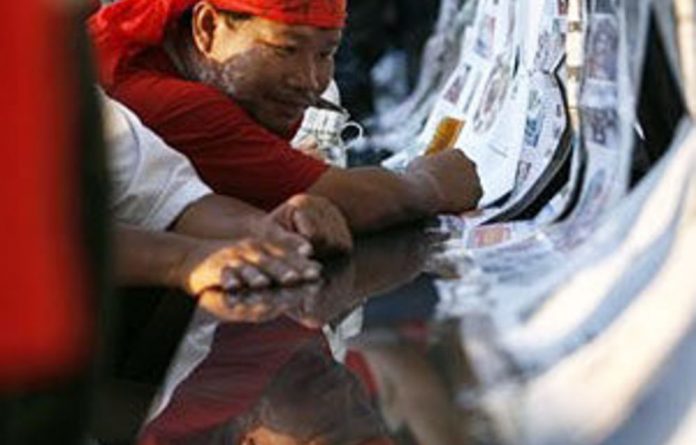 Thai “red shirt” protesters on Tuesday threatened to march on an army barracks where Prime Minister Abhisit Vejjajiva has been based after the Election Commission unexpectedly recommended his party be dissolved.

Abhisit, who came to power in 2008 when the army brokered a deal in Parliament, would have to step down if the Constitutional Court, following the Election Commission’s findings, found his Democrat Party guilty of funding irregularities.

The red shirts, who want Abhisit to quit now, said they would step up their protest, after their month-long rally turned violent on Saturday, with plans to send out hundreds of motorcyclists handing out leaflets and pictures from the clashes.

“We are also contemplating a march to the 11th Battalion to ask Abhisit and the army he is hiding behind for an answer,” red shirt leader Nattawut Saikua told reporters. Abhisit has mostly operated from the base since the protests began a month ago.

The red shirts say troops gunned down protesters, but the government says shadowy “terrorists” were responsible.

It was Anupong’s first public comment since his forces failed on Saturday to eject protesters from their base in central Bangkok in clashes that killed 21 and wounded hundreds in Thailand’s worst political violence in two decades.

“It looks like Abhisit’s fortune may be waning,” said Sukhum Nuansakul, an independent political scientist.

“The tide could still turn, but at this point it looks like the army and the coalition partners are becoming risk averse and looking out for themselves. Violence on Saturday altered the equation a little and is making things difficult for Abhisit.”

The electoral fraud case could take months as prosecutors and the Constitutional Court act on the commission’s recommendation. A guilty verdict could lead to the dissolution of Abhisit’s Democrats, the country’s oldest party, and Abhisit and party executives would be banned from politics for five years.

The court found two Thaksin-allied parties guilty of fraud in 2007 and 2008.

Some analysts view the Election Commission’s surprise decision as a gesture to the red shirts, who have complained of double standards in law enforcement. It also puts additional pressure on Abhisit to decide whether to call fresh polls.

“We should not rule out negotiations with every side, including Thaksin,” Bhumjaithai Party leader Chavarat Charnvirakul told Reuters.

Divided military?
Despite army commander Anupong’s comment that “parliamentary dissolution seems to be a reasonable step”, some questioned whether the army agreed on the way forward.

“It’s not clear if the army is speaking with one voice,” said Charnvit Kasertsiri, a prominent Thai political historian.

“Anupong is retiring and is looking for a graceful, non-confrontational exit but others, including his potential successor, may have a different solution.”

The deadlock brought back speculation of another coup in a country that has seen 18 since 1932.

Bangkok has been calm since Sunday but thousands of red shirts remain camped out in two areas of Bangkok, including an upmarket shopping district whose big malls have had to stay closed for much of the past 10 days.

In a letter to Reuters, Abhisit offered his condolences to the family of Hiro Muramoto, a Japanese Reuters TV cameraman who was shot dead during the protests by an unknown assailant.

“My government is determined to restore peace and the rule of law as soon as possible,” he said. “It is my earnest hope that there will be a prompt return to political normalcy in Thailand.” — Reuters