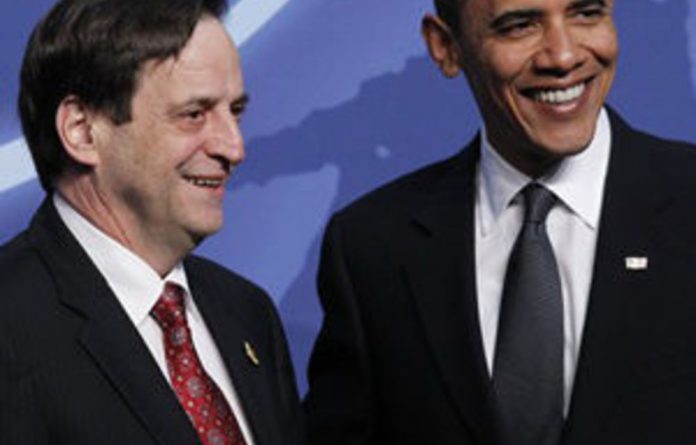 World leaders meet in Washington on Tuesday for the biggest summit hosted by the United States since 1945, and they will have just one item on the agenda — stopping terrorists from getting a nuclear bomb.

President Barack Obama, who is hosting the 47-nation summit, says nuclear terrorism is the single biggest threat to global security. He wants to galvanise countries to take action to prevent terrorist groups from getting their hands on nuclear material that could be used to make a bomb.

Some nations are skeptical about the seriousness of the threat, however, and view it as an American preoccupation after al-Qaeda’s attacks on the United States on September 11 2001.

Obama’s counterterrorism adviser, John Brennan, said on Monday that al-Qaeda had made it a top priority to acquire the expertise and material to make a nuclear bomb, which he warned would allow them to “threaten our security and world order”.

Washington is concerned about the security of hundreds of tonnes of highly enriched uranium and plutonium scattered about the globe in nuclear reactors, research facilities and military installations that may be vulnerable to theft.

After the end of the Cold War, Washington worked with Moscow to improve often poor security of nuclear material in Russia and former Soviet republics. Now it wants to broaden the focus of these efforts and to persuade countries to take more responsibility for cracking down on nuclear trafficking.

According to a draft summit communiqué, leaders will pledge to work toward safeguarding all “vulnerable nuclear material” within four years and to take steps to stamp out nuclear smuggling.

US officials have sought to emphasise the historical nature of the summit, the biggest gathering on US soil since a conference in 1945 that created the United Nations.

“I think it’s an indication of how deeply concerned everybody should be with the possibilities of nuclear traffic, and I think at the end of this we’re going to see some very specific, concrete actions that each nation is taking that will make the world a little bit safer,” Obama said on Monday.

Ukraine to hand over uranium
The first tangible results of the summit came as Obama held a series of meetings with foreign leaders, including Ukrainian President Viktor Yanukovich, who announced Ukraine would get rid of its stockpile of highly enriched uranium by 2012.

The move by Kiev is designed to make it harder for terrorists to get hold of nuclear material. Ukraine will also convert its civil nuclear programme to operate on low-enriched uranium, Yanukovich said.

Also on Monday, Canada announced it would return a significant amount of spent nuclear fuel to its place of origin — the United States, which may also take some of Ukraine’s Russian-origin nuclear material.

The summit is the culmination of a hectic period of nuclear diplomacy for Obama.

Last week he signed a new treaty to cut US and Russian nuclear arsenals and unilaterally announced the United States would limit its use of nuclear weapons, a plan that came under heavy fire from his conservative critics.

Iran and North Korea, which are both locked in stand-offs with the West over their nuclear programmes, are not on the agenda of the summit and were not invited to attend.

The White House has repeatedly stressed that the summit is narrowly focused on nuclear terrorism, but many were watching to see what emerged from Obama’s meeting on Monday with Chinese President Hu Jintao, whose country has close economic ties with Iran and has been reluctant to impose tougher sanctions on it.

UN sanctions for Iran
Obama stressed to Hu the need to act urgently against Iran’s nuclear programme, and Hu agreed that Beijing would help craft a UN sanctions resolution. There was no sign though that China would accept the tougher sanctions sought by Obama.

Also represented are India and Pakistan, which never signed the 1970 nuclear Non-Proliferation Treaty but have atomic arsenals, and Israel, another NPT holdout that is presumed to have atomic weapons but has never confirmed it. – Reuters