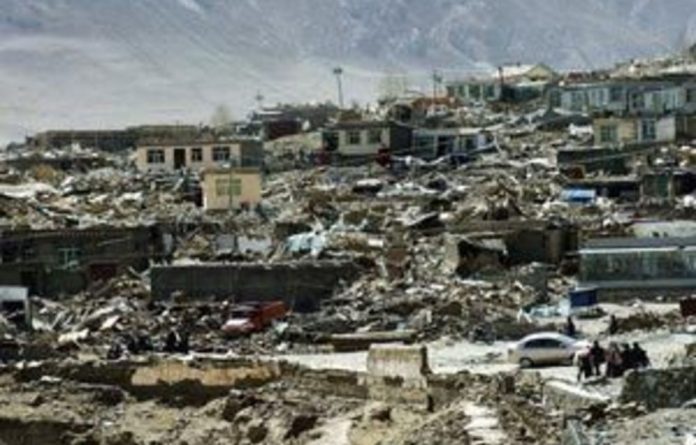 Rescue workers dug through piles of rubble on Thursday searching for survivors of a devastating quake in a remote area of northwest China which killed over 600 people and left thousands homeless.

Battling strong winds and a lack of oxygen, teams were forced to use shovels, iron bars and their bare hands in the hunt through the ruins of the hardest hit town of Jiegu as doctors set up makeshift hospitals in tents.

Thousands spent the night without shelter in freezing temperatures following the 6,9 magnitude quake which hit mountainous Yushu county in Qinghai province on Wednesday, destroying almost all the houses in Jiegu, the local capital.

The number who perished has risen to 617, including dozens of children, while the number of injured stood at 9 110, state television reported.

But the death toll was expected to rise further, with more than 300 still buried under collapsed mud-and-wood houses and school buildings in the mainly Tibetan region.

“Freezing weather, high altitude and thin air have all made rescue efforts difficult,” Hou Shike, deputy head of the China International Search and Rescue was quoted as saying by the Xinhua state news agency.

President Hu Jintao called for all-out efforts to save as many people as possible, with more than 5 000 rescuers, including 700 soldiers, rushing to the disaster zone on the Tibetan plateau known as the “Roof of the World”.

Relief effort underway
As the international community began pledging help, the Chinese government said it would provide over $29-million in aid after the deadliest quake in almost two years.

But the rugged terrain and remoteness of the region, around 800 kilometres or at least 12 hours by road from the provincial capital Xining, were hampering efforts to bring in much-needed supplies.

Dazed survivors told harrowing stories of loved ones being crushed to death under their homes.

“There are 10 people in my family and only four of us escaped. One of my relatives died. All the others are buried under the rubble,” Samdrup Gyatso, 17, told Xinhua after his two-storey home crumbled.

The civil affairs ministry said it was to send 5 000 tents, 50 000 coats and 50 000 quilts. But the local government in Yushu — the quake’s epicentre — reported a lack of tents and medical supplies.

The quake and a series of strong aftershocks have damaged roads and triggered landslides, disrupting telecommunications and knocking out electricity supplies.

Survivors spent an uncomfortable night in the open with temperatures below freezing while rescue workers from outside the region struggled to cope with the lack of oxygen at about 4 000 metres above sea level.

Forecasters are predicting wind and sleet in the coming days, putting victims at risk of exposure, as well as the risk of more aftershocks.

Among the dead were at least 66 pupils and 10 teachers, Xinhua said, quoting local authorities, as dozens of grieving parents waited for news.

The scene was reminiscent of the huge quake in May 2008 in Sichuan province, where thousands of children died when their shoddily-constructed schools fell on them — an issue that caused huge controversy in China.

Nearly 87 000 people were killed or missing in the 2008 disaster, the worst in China in more than three decades.

Qinghai province was also hit by a quake in April 1990 that left 126 dead.

Show of support
The United States was “ready to assist” in the rescue effort, Secretary of State Hillary Clinton said, while the United Nations said its chief Ban Ki-moon “recognises the efforts being undertaken by the government of China to assess the situation and to assist those affected by the earthquake”.

Exiled Tibetan spiritual leader the Dalai Lama offered prayers for those who died while Pope Benedict XVI called for “solidarity” with the victims and nations including France, Germany and Japan voiced shock and offered help. — AFP