Parreira: We need to emphasise our strengths 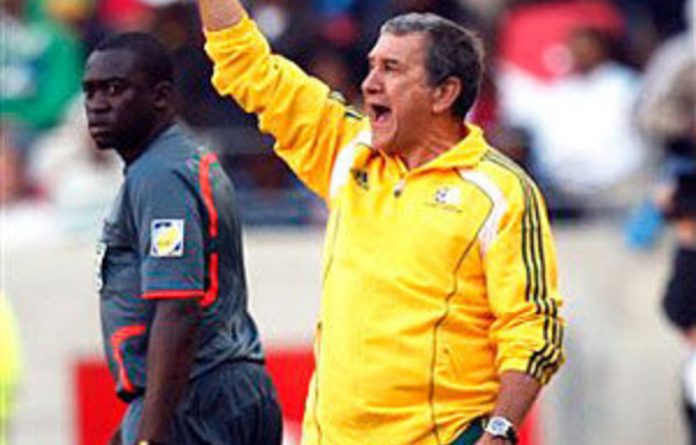 South Africa coach Carlos Alberto Parreira said on Friday it was much too early to determine how much progress his Bafana Bafana have made in their preparations for the Soccer World Cup.

The Brazilian boss has put his players through three days of drills and physical work in the early stages of their nearly three-week training camp in southern Germany.

“We cannot tell you [about any improvements]. It is only after games that we can see progress. It’s a process. And we will know more after one, two or three games,” Parreira said at the team’s hotel in Herzogenaurach.

“Whatever I tell you is not the truth.”

South Africa hope to play three friendly matches during their stay in Germany — the biggest being a match against China on April 28.

Parreira said he and the South African team’s bosses have worked hard in lining up more friendly matches — but to little avail.

“But I have tried since December. Nobody is willing to play one game at this time.”

The coach reiterated that his emphasis during this training camp will be to bring his side to top physical shape — something that will be needed when the World Cup starts against Mexico on June 11.

“We should be physically very keen and at the highest level. We need to be a fighting team. And we have to emphasise our strengths. We are good when we put the ball on the ground. We can’t think about contact, we have to stress ball movement and tactics,” said Parreira.

‘Defining the shape’
The former World Cup-winning coach believes about 14 or 15 players of the 25-man squad in Herzogenaurach will make the team for the World Cup.

And he hopes to use the current camp to build upon the month-long session in Brazil to form a foundation for the team. And then after the European leagues are completed, his European-based players will come in and fit into the side.

“In Brazil and here we are defining the shape. And the players from overseas will fit into the shape,” said the coach.

“We want to get the foundation set and then have the others come in and fit into the shape.”

A problem for Parreira is that many of the foreign-based players are not getting a lot of playing time. And that may pose a problem come mid-May when they join the other players who have worked in camp since early March.

“It is not ideal. Those coming later will maybe play three games. The others had nine games in Brazil and three here, plus the remaining three. And the overseas guys will only play at most three games. So having a player not playing for six months is a headache.” — AFP