Written on the body 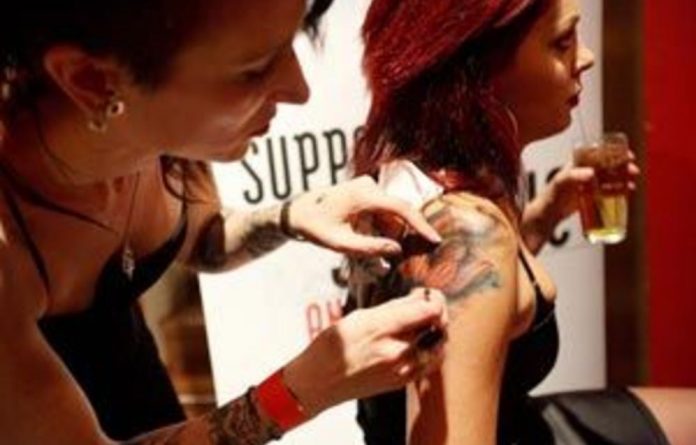 When I’m brave enough to have a tattoo it will be one of a crowned bee taking flight. The reason is simple really: I come from a royal family and our totem is a bee.

As was clear last week Wednesday when tattoo company Jaded Ink hosted its annual fashion show at the Barnyard Theatre in Fourways, people attach powerful meaning to the art they display on their skin. The venue was abuzz with models, ordinary people with Art Deco on their flesh — as well as cameras trying to sneak a peek.

Actress and model Christina Storm enjoyed the attention of Lee Chapman, one of Jaded Ink’s tattoo artists, who painted a flower on Storm’s right shoulder. But this was no ordinary tattoo: it had a life span of three days to a week.

Chapman explained to me the difference between airbrushing, which is what she was doing on Storm, and real tattooing. “With regular tattooing the ink goes into the skin, with airbrushing the ink stays on top. Skin reacts differently in each area, so when you tattoo you really have to stretch the skin. If you make a mistake, it’s for life.”

Airbrushing is mostly used for movies, photo shoots and commercials, she said.

Storm was seated on the makeshift stage wearing a tight black number. With her red hair let down she looked completely in her element. She already has a number of tiny tattoos. On her inner arm, below the elbow, is her dad’s signature, her inner left wrist bears her child’s name and on her right shoulder is a pink star — which she said all her siblings have as well.

There was regret and confusion in her voice when she described the last one — a “shit one on my back which is Japanese. I’m not even Japanese.

“Tattoos are to beautify yourself,” she said. “It’s an age-old tradition. It’s been around for many years. I really appreciate tattoos and the artistry that goes into them,” said Storm.

On my way to the next live exhibition I encountered a belly-dancing Carmel Fisher, the actress, model and businesswoman. She was wearing a top that revealed her stomach — which was completely covered with a tattoo of a fierce tiger that would not take its eyes off you.

Jaded Ink artist Kylie Serebro was tattooing one of the Suicide Girls, Lynx. Etching stars on Lynx’s chest, Serebro refilled the ink periodically — which is when, so as to help avoid that permanent mistake Chapman had mentioned, I chose to speak to Lynx.

Lynx’s chest is a busy place: just above her cleavage she has a “Hello Kitty” tattoo — and now she has stars in the region too. She says she loves her tattoos in colour because they look cuter. Possibly not everyone agreed with her: she admitted that most people ask her whether the “Hello Kitty” one is real.

“So what do the Suicide Girls actually do?” I asked. “We pose half nude or naked on the internet, and we show bums and boobs. Most of us are tattooed,” Lynx said.

It was time for the main event of the night — the fashion show. The stage was lit in red and blue. Jaded Ink co-owner Jade — no surname divulged, and he’s a man (in case you were wondering) — emceed the show. He was bald, wore a black suit and had ear, tongue and lip piercings and, as you’d expect, many tattoos.

And then the showstopper — the evening’s unforgettable model stepped on to the catwalk. Jo-Anne, in a black miniskirt, turned around to reveal that no clothing concealed the apocalyptic depiction of two angels and a dragon.

“Tattoos tell a story of who we are,” Jade told the audience. This is only Jaded Ink’s second body art show — the first was at its launch a year ago. The packed Barnyard Theatre suggests the tattooed search for the meaning of who you are will be even more intense next time.