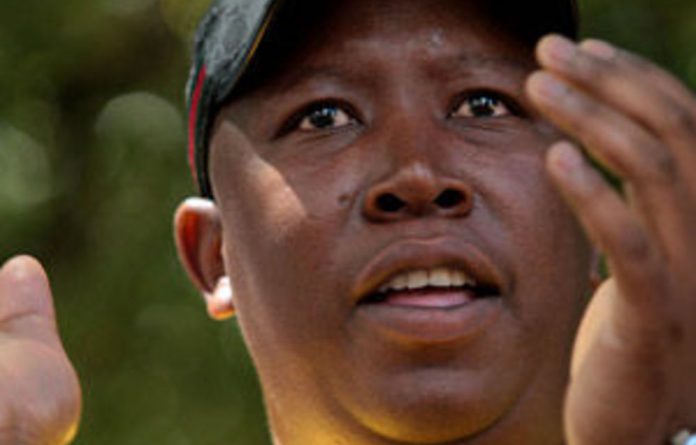 Top ANC leaders and its youth league were expected to meet on Monday amid reports that Julius Malema had been formally charged with ill-discipline.

“There is an expected meeting today [Monday]. I think the meeting has been anticipated,” said African National Congress Youth League spokesperson Magdalene Moonsamy.

The national working committee of the youth league would meet the top leadership structure of the ANC, she said, declining to elaborate.

Sunday papers reported that the youth leader had been charged for alleged ill-discipline and bringing the organisation into disrepute.

He was to appear before a disciplinary committee headed by Derek Hanekom, reported the Sunday Times and City Press.

Malema apparently received a letter from ANC secretary general Gwede Mantashe to inform him of the charges.

The youth leader is said to be accused of bringing the ANC and the government into disrepute by publicly endorsing Zimbabwe’s ruling Zanu-PF party and attacking the opposition Movement for Democratic Change during a recent visit to that country.

In addition, he faced possible censure for remarking that former president Thabo Mbeki had never rebuked the youth league publicly when he disagreed with it, unlike President Jacob Zuma.

He also faced charges for saying, after Eugene Terre’Blanche’s murder, that the right-wing leader died before changing his racist behaviour, and for his aggressive behaviour at a press conference towards BBC journalist Jonah Fisher, calling him a “bastard” and “bloody agent”.

According to the charges, Malema brought the ANC into disrepute, and violated the moral integrity expected of members or public representatives of the organisation.

According to the Sunday Times, charges against him included promoting racism, sexism, tribal chauvinism, and religious and political intolerance.

Zuma to be taken to task
Meanwhile, the Mail & Guardian reported on Friday that members of the ANC’s top leadership were to take Zuma to task over his public scolding of the youth leader.

The M&G learned that at Monday’s national working committee meeting, Malema’s supporters will tell Zuma that he was wrong to criticise Malema in public. It is understood that the committee members who are unhappy with Zuma’s public reprimand include Deputy Police Minister Fikile Mbalula and ANC national treasurer Mathews Phosa.

However the ANC’s leadership is far from united on the matter of criticising Malema. The Umkhonto weSizwe Military Veterans’ Association and ANC Women’s League president and Basic Education Minister Angie Motshekga are preparing to come to Zuma’s defence.

Kebby Maphatsoe, the association’s chair, told the M&G: “When you make statements in public and the head of the organisation criticises those utterances in public, you cannot say the president is wrong.”