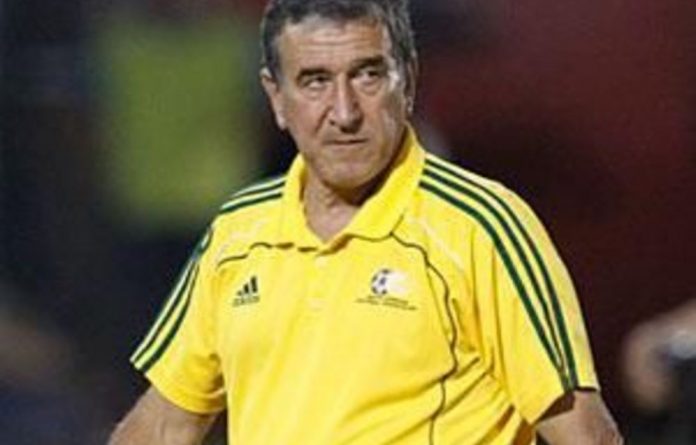 South Africa’s World Cup squad completed the first week of a training camp in Herzogenaurach, Germany, on Monday in upbeat mood despite continuing uncertainty over their World Cup warm-up programme.

The only confirmed friendlies are against China and Denmark, with possible games also scheduled against Estonia and North Korea.

Bafana Bafana coach Carlos Alberto Parreira has been quite vocal in the past two weeks in criticising South African football leaders for not organising better opposition ahead of the World Cup, which kicks off on June 11 with South Africa taking on Mexico.

The World Cup hosts’ first week of training in the southern town of Herzogenaurach focused predominantly on high-intensity training.

The concentration for the second week will be on ball-work technique and tactical formations.

“We are improving slowly, and so far so good because we are playing as a unit and the shape is there, so things are looking good for us,” said South African midfielder Siphiwe Tshabalala.

“Everyone in the team is aware that the World Cup is around the corner. And the expectations are high from the public, so we need to deliver as a collective.”

The nearly-three-week stay at Herzogenaurach is South Africa’s second training camp in World Cup preparations after spending a month in Brazil for most of March and early April.

“In Brazil we worked very hard but our performance was a bit low because it was our first real camp. Here in Germany we have put in even more work and this has increased our performance tremendously,” said midfielder Andile Jali.

“I believe the upcoming matches will go a long way in helping us improve more. We saw what we can do in Brazil during the games; now we need to better that achievement.”

Unclear
It remained unclear by Monday afternoon exactly how many friendly matches the World Cup hosts will play during their stay in Germany.

The location of the China game has yet to be announced but it appears likely that it will take place in Fuerth.

The South Africans will also play against Denmark on June 5 in Johannesburg.

South Africa media officials said a friendly against Estonia is planned but not yet confirmed for Saturday April 24.

South African Football Association officials also hope to set up a warm-up against the North Koreans for Thursday April 22.

The Asians are training in Spain and had hoped to play the game in Spain while South Africa wanted the match to take place in Germany.

South Africa media representatives told Agence France-Presse on Monday that the North Koreans will likely give in and travel to Germany.

The South African team’s schedule for the second week also includes the launch of the 2010 Fifa World Cup ball on Tuesday at the Adidas headquarters in Herzogenaurach. — AFP