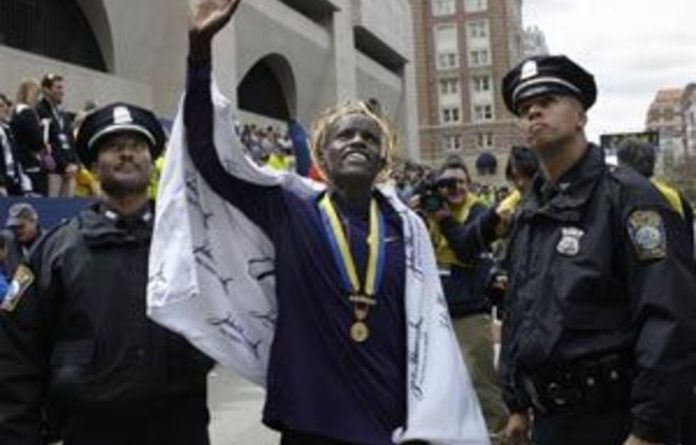 Kenya’s Robert Kiprono Cheruiyot smashed the course record to win the Boston Marathon men’s race on Monday, while Ethiopia’s Teyba Erkesso captured the women’s title by a few steps in a sprint finish.

Cheruiyot said he wanted to stick with Merga, who broke from a large pack of men’s runners at mid-race.

“If somebody is a champion, you try to go with them,” said the 21-year-old, who broke Robert Kipkoech Cheruiyot’s previous course record of 2:07:14 set in 2006. The two are not related.

Ryan Hall led at the halfway mark before finishing fourth in 2:08:41, the fastest time for an American man.

“My goal going into the race were to have fun and to run free,” Hall told reporters.

In the women’s race, Erkesso built a big lead going into the final few miles but was reeled in by Russia’s Tatyana Pushkareva, which set up a furious sprint down Boston’s Boylston Street to the finish line.

The Ethiopian said she attempted to drive the pace from the start, fearing that other runners had stronger finishing kicks.

“I knew the Russian lady was coming from behind me. ‘She doesn’t pass me today,’ I’m thinking in my mind,” Erkesso said. “I didn’t believe I would win it until the very end.”

African men have won 19 of the past 20 editions of the 42,2 km race from Boston’s hilly suburbs to its centre. — Reuters