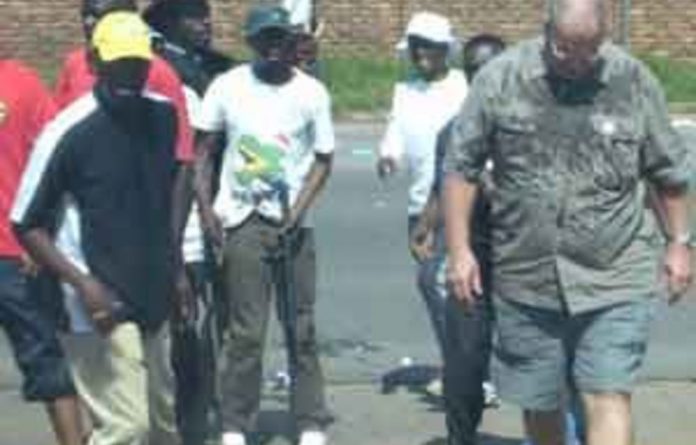 A Kempton Park petrol station owner was whipped and stoned by protesting members of the South African Municipal Workers Union (Samwu) on Thursday, when he tried to extinguish a fire they had started around his filling station.

“We had a dangerous situation that day because of a leaking pump so I wasn’t going to risk it. So knowing that I tried to extinguish the fire and the protestors obviously didn’t take too kindly to that,” Chris Laas told the Mail & Guardian on Monday.

He was attacked by about 10 protestors who then ripped the fire hose he had been using out of the wall. According to Laas various “kill the boer” comments were also made during the attack.

After about ten minutes Samwu crowd marshals were able to rescue him. His bookkeeper, who witnessed the attack, called the local fire department to extinguish the fire but “they were unable to come because of lack of personnel”.

Fire department strike
The fire department told the M&G on Monday they had failed to respond because of a strike by their personnel, which was still continuing.

Protestors vandalise a petrol station “The mob was setting rubbish alight and that’s why my boss went out to douse the flames,” said the bookkeeper, who wished to remain anonymous. “The mob had also gridlocked the streets with stones.”

She added that electrical boxes next door to the petrol station were vandilased leaving the flats without power for two days.

The fire around the filling station was finally extinguished when the crowd moved on.

Laas said there was no police presence and he had not bothered to press charges against those who attacked him.

‘Doesn’t help’
“What would it help? Spend an hour giving a statement? We always have people driving off without paying for petrol and we report it and nothing happens — that’s been our experience,” he said.

Samwu spokesperson, Tahir Sema, said the union did not condone any form or manner of violence.
“We have indicated that violence is not part of the tactics we use to fight in our arsenal,” he told the M&G.

“The union’s national executive committee, the second most important decision making body, received reports detailing all types of violence and will consider appropriate action. The perpetrators will be held to account,” he said.

Sema said although they could not quantify the amount in damages incurred during the strikes ‘a lot of the damage was isolated and was not as rampant as claims we have received from the private sector”.

Refuse has not been removed from South African city streets since the strike began on Monday April 12, causing chaos across the country. Angry protestors marching around the country have been accused of vandilising property and tipping refuse bins, leaving rubbish to litter city streets. According to Samwu, its members will clean up the streets after the strikes are over.

Understandable?
Although Samwu does not condone trashing, the union said it understands why their members resort to it. “Our workers see it as the only way to get their voices heard,” Sema said.

The strikes have dragged on as negotiations take place, and while Samwu said it wants the mass action to end, it also said it will continue its stayaway until its members’ demands were met.

Samwu is also calling for two years back pay from Salga as part of its bid to get market-related salaries for lower and middle income workers.