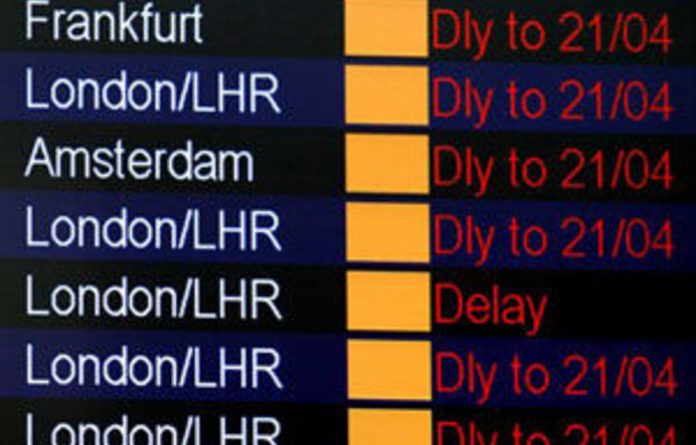 Swarms of stranded passengers scrambled on Wednesday to hitch a flight home after Europe’s air embargo ended in a dramatic game of brinkmanship in the skies over the continent’s busiest airport.

SAA hopes to resume European flights on WednesdayNearly a week after the eruption of a volcano in Iceland triggered the worst disruption to aviation since World War II, airlines struggled to resume normal schedules but warned that many passengers would see their agony prolonged.

After authorities in Britain finally reopened the whole of its airspace on Tuesday night, all of Europe’s main air hubs were up and running once more, with Germany announcing all of its airspace would reopen at 9am GMT.

Even Nordic countries such as Norway and Denmark allowed their airspace to open to jets once more amid a backlash from within the aviation industry over blanket bans originally imposed by governments.

Iceland’s civil protection agency said the Eyjafjallajökull volcano had lost nearly 80% of its intensity since its weekend peak.

“The last information we have is that eruption has about 20% of the power it had Saturday,” spokesperson Ingveldur Thordardottir said.

“The plume was less than 3km and I would say it could be even lower,” she said, adding that a coastguard plane would take off during the morning to overfly the eruption zone, currently hidden by the clouds.

Scenes of jubilation
Millions of passengers had their travel plans affected since governments closed their airspace last Thursday and IATA, the body representing the global airline industry, put the overall cost of the crisis at $1,7-billion.

Flights were finally cleared for landing at London’s Heathrow airport at 10pm local time after British Airways flew dozens of its long-haul planes back to Britain even before the government had lifted the no-fly zone.

Some were initially turned away and forced to land at other airports but there were scenes of jubilation on other planes when their pilots announced that they had been cleared to land at Heathrow, Europe’s busiest airport.

British Airways chief executive Willie Walsh had branded the ban on flights as unnecessary, with the disruption heaping further misery on an airline that has already taken a major hit from recent industrial action.

British newspapers said that Prime Minister Gordon Brown’s Labour government, facing an election next month, had been “bounced” into a climbdown.

British Airways said it was hoping to operate all long-haul flights from Heathrow and Gatwick as normal on Wednesday but warned of short-haul cancellations to and from London airports up to 12pm GMT.

Virgin Atlantic also planned to run its normal schedule, while warning that a small number of flights may be delayed as aircraft and crews are deployed to the right places.

Budget short-haul operator easyJet intended to resume some services, but said it would take several days to resume normal operations and delays were likely.

Frances Tuke, a spokesperson for the British travel organisation Abta, warned passengers against getting their hopes up as many aircraft and crew “are going to be in the wrong place”.

“I know for example that some of our tour operators have decided to cancel their programmes going out of the UK in order that they can try to reposition their aircraft and crew,” she said. “It’s a huge logistical operation.”

Emirates said it was trying to operate as many flights as possible but warned on its website that “the situation across Europe remains unpredictable and passengers are asked to be patient”.

Wolfgang Mayrhuber, the head of German flag carrier Lufthansa, said the firm expected to operate about 500 flights, a third of its normal service.

Like BA’s Walsh, Mayrhuber had been hugely critical of the ban, denying the ash clouds constituted a danger.

“There are no standards at the moment on the concentration of ash that could affect” airplane engines, Roberto Kobeh Gonzalez, the head of the UN International Civil Aviation Organisation, told reporters when asked if it was safe to fly with the volcano still actively expelling ash.

“We cannot invent the standards. This is something we have to work with the industry.” — AFP