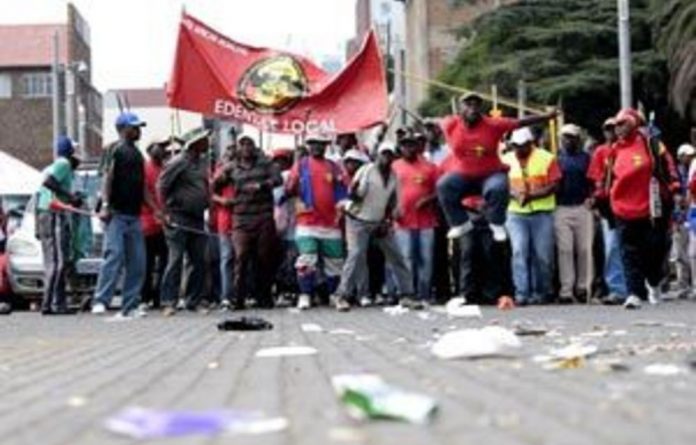 Hopes of an end to the municipal workers’ strike were dashed on Tuesday night, with no resolution yet on a pay parity deal, the South African Municipal Workers Union (Samwu) said.

Spokesperson Tahir Sema said there was no resolution yet.

Samwu and the South African Local Government Association (Salga) are at loggerheads over a demand for market-related salaries for lower- and middle-income workers.

They also want senior municipal officials’ pay to be reduced, so that they too get market-related salaries.

The most visible effect of the strike have been the severe disruptions to refuse removal services.

Clinics, municipal bus services and other municipal services have also been hampered.

Samwu said it had so far reached an agreement that councils would no longer outsource legal expertise for disciplinary hearings.

The union also wanted two years’ backpay on salaries that had been adjusted, but Salga is not budging on this.

The city of Johannesburg said it was concerned that there was no resolution because of the “unrealistic demands by the union”.

Spokesperson Gabo Towanda said residents and visitors to the city were being severely inconvenienced by the absence of service delivery.

“This situation is aggravated by the rampant vandalism and destruction perpetrated during the recent Samwu march through the city which was, once again, accompanied by the trashing of streets and the intimidation of members of the public.”

He said the city was concerned that negotiations were being stalled and the failure of the Samwu leadership to take responsibility for the actions of its members.

“While the City of Johannesburg respects the rights of individuals and organisations to freedom of speech and assembly, it cannot allow its employees, residents and the business community to become victims of vandalism, violence and intimidation,” said Tugwana.

He said it was incumbent on the union’s leadership to condemn the behaviour and instil discipline among its members. — Sapa