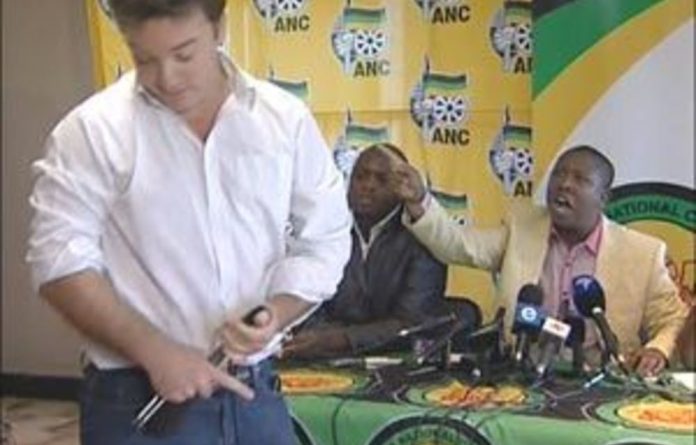 He is notorious for trying to whip up crowds with a political song that many feel is a dangerous throwback to racial apartheid. But young South Africans seem more enthused by Julius Malema’s unwitting foray into music.

Enterprising DJs have turned Malema’s recent outburst against a BBC journalist into house music. The remixed tracks are playing on radio stations, being circulated on mobile phones and proving hugely popular at parties.

Malema, president of the African National Congress Youth League, is facing possible disciplinary charges after ejecting the BBC’s Jonah Fisher from a press conference, accusing him of “white tendency” and calling him a “bastard”, “bloody agent” and “small boy”.

He fumed: “This is not a newsroom, this is a revolutionary house.”

The Julius Malema Song features his exclamations “agent” and “bastard” scored with a hip-hop beat. It has had nearly 7 000 views on YouTube, with a slideshow of images including Malema riding a horse like murdered white supremacist Eugene Terre’Blanche, a printout of Malema’s school exam results including his H grade in maths, Malema as a string puppet controlled by President Jacob Zuma and Malema’s face superimposed on a baby in an advert for Huggies nappies.

Another YouTube posting of the track, ‘Revolutionary house mix by Malema“, has had nearly 5 000 views.

There is a more comprehensive musical rendition of the notorious exchange under the title Tjatjarag, an urban slang word used by Malema during his tirade that means excitable and over-eager.

The Sowetan quoted Malema’s lawyer, Tumi Mokoena, as saying that he had not spoken to him about getting royalties for the songs.

Eugene Honey, a director at Bowman Gilfillan attorneys, told the paper that Malema did not have any copyright over the remixes. “Copyright has to be in material form,” he said. “It must be written down, maybe on a CD.”

A young South African, Bontle Phiri, told the Sowetan: “I like it. It makes me laugh and you can dance to it. But what is sad is that a leader said those things.”

Malema’s singing days may be numbered. He has said he will heed the ANC’s call for restraint and stop singing the apartheid era song that has the words “shoot the Boer”, blamed by some for inciting the recent murder of Terre’Blanche. —