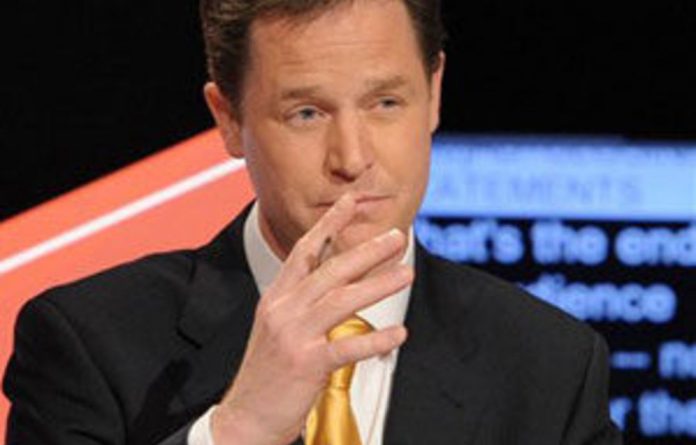 Britain’s election remained wide open on Friday after the three main party leaders were unable to land a knockout punch on their rivals during a combative live televised debate.

Frontrunner David Cameron of the centre-right opposition Conservatives and Prime Minister Gordon Brown of the Labour Party were under pressure to deliver big performances to stem the challenge of lesser-known Liberal Democrat Nick Clegg in the run-up to next month’s poll.

The leader of Britain’s centrist third party had seen a surge in popularity after an assured performance in the first debate last week.

Instant opinion polls were split on who had won Thursday night’s debate, with two saying Cameron was ahead and three saying Clegg had taken the honours again.

“I thought it was a score draw,” said Justin Fisher, professor of political science at Brunel University.

Broader polls of party support, which have been dominated by Cameron during the past two years, now indicate a “hung Parliament” after May 6 with no party winning an overall majority — a rarity in British politics normally dominated by Labour or Conservatives.

Balance of power
Clegg could hold the balance of power under such a outcome, with markets wary of political deadlock complicating efforts to cut a record budget deficit.

Labour, in power for 13 years, argues that spending cuts to trim the budget deficit must be delayed until recovery is assured, a view shared by the Liberal Democrats. The Conservatives want to start cutting sooner. Thursday’s clash, on foreign issues such as Afghanistan and Europe and domestic policies such as immigration and nuclear weapons, was the second of a series of three planned for the campaign — the first time in British history that the main party leaders have taken part in TV debates.

Britain’s newspapers appeared divided along party lines, with the Sun, the country’s biggest-selling daily tabloid and Conservative backer, running with the headline “The Cam Back Kid”, referring to Cameron’s bounce after last week’s surprisingly poor showing.

Its competitor, the traditionally Labour-supporting Daily Mirror, had the headline “One Foot in the Dave” — claiming the “hapless Cameron had flopped again”.

The left-leaning Guardian went with “Clegg Weathers the Storm”. — Reuters